The 2021 Virtual Ride to Conquer Cancer took place over two days, the August 28-29th weekend. For Ride #4, my final pledge ride, I picked Saturday, August 28th, mostly because my parents got married on that date in 1943, nearly 80 years ago!

Ed snapped this pic of me as I headed out, wearing my yellow Ambassador’s jersey. The weather looked cloudy and unsettled so I skipped the opening speeches on YouTube to beat the heat.

I rode east to Bayview and turned south, treating myself to a 1 km downhill zoom to the Don Valley bike trail that runs parallel to the Bayview Extension – an easy ride past the Brickworks and Rosedale Valley Road to River Street.

Thanks to COVID, the City has made the tail end of Bayview Extension one way and carved off half a lane for a new bike path.  That deposited me squarely into the Canary District and the corporate art therein. 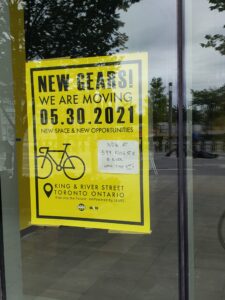 A moment of nostalgia for the super-techs at Gears Bike Store: they fixed my flat in 15 minutes during the 2020 virtual Ride. They’ve now relocated north to King St.  The Canary District looked deserted: not the eastern twin of overbuilt Liberty Village…yet.

I decided to take the lakeshore trail to stay out of traffic and use the headwind to ward off the promised heat.

Passing under the Gardiner Expressway, I took in the gallery of street art.

Once again, it was a fast ride with the west wind behind me.  The lake looked spectacular though the rain clouds did look ominous.

Few people were out this morning. I passed the occasional dog walker and happily connected and chatted with a fellow Rider who was doing her third Ride.  By the time I reached the Distillery District for my usual Balzac’s break, I was almost exactly halfway done.  Waiting for Ed to drive down to join me, I found some neat things: the original shoreline of Lake Ontario memorialized and the LOVE sculpture.

Pledging eternal love by using a padlock originated in Europe in the early 2000s even though the origin is sad. During WWI a young Serbian woman fell in love with a soldier and they put a padlock on the Bridge of Love. He left her for another and she died of heartbreak.

Not a great recommendation but since 2000,  lovers have placed locks on bridges and fences throughout the world. In Paris, the Pont des Arts was so overloaded that in 2014 part of its parapet collapsed. Cities now routinely remove these padlocks. Some, taking a more positive route, invite people to create sculptures like LOVE above. Read more about love locks here.

After coffee, I cycled out along the Lakeshore bike path to my usual turnaround point at the Humber Bridge and Palace Pier.

On the bridge, I met and chatted with a team of fellow riders, all wearing yellow jerseys. They all work for the same software company and were riding for the father of the young woman with them.  A heartfelt moment and reminder of why we ride.

On the way back, I began to feel the heat, but luckily I was nearing the end of the journey. I turned up Bay Street and kept to the lane reserved for bikes, cabs and buses. I played chicken with three buses all the way up to Belmont Street. With relief,  I turned right and from there went north onto Yonge St.

Once again, thanks to COVID, the City has installed a bike lane up Yonge St. starting at Bloor  St. It was the fastest way home for me though it did mean two thigh-burning climbs between Summerhill and St. Clair Ave.

Happily when I passed the Summerhill clock tower, I hit the 50 km mark! After I reached St. Clair, I had a quick pedal through the calm of Mt. Pleasant Cemetery, said hello to the boys and arrived home in time for lunch.  Total distance: 53.422 km!!

This was my 14th Ride. Did I sign up for next year? Of course, I did. Who could say no to a pair of stylish socks like these?

Apparently only 64 riders have done the Toronto Ride every single year since the inaugural one in 2008. I’m one of them!

On to training for 2022 and big hugs and many, many thanks for your wonderful support of cancer research at Princess Margaret Hospital.