Our cottage, like nature itself, suffers waves of infestations. At one time, a neon-green grass thrived under the pine trees. We called it “glow grass”. It was the only plant I’ve encountered that grew unrestrained in soil rendered acidic by pine needles. This fascinating weed inspired my thriller, Glow Grass, a finalist for the CWC Best Novella award. 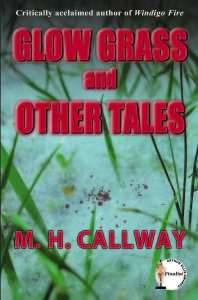 Our glow grass has vanished in recent years. The tall trees and thick bush plus the wet summer created a dark moist environment conducive to…mushrooms!

Looking out our bedroom window I spotted orange dots all over the grass. What a pretty autumn flower, I thought. Venturing outside I found a fairy ring of strange yellow mushrooms. 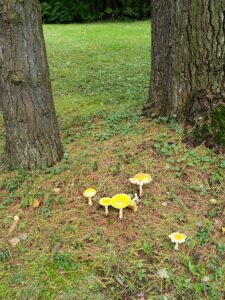 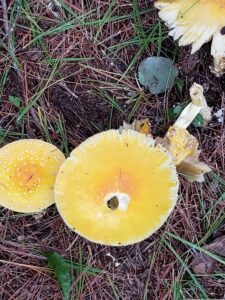 Ee-yuck! I am not a mushroom fan. As a child, I was warned over and over that all mushrooms were deadly poisonous. These yellow guys did not look at all like the benign grocery kind.

Thanks to the Fount-of-all-Knowledge, i.e. the internet, our daughter identified them as most likely  Amanita flavoconia or “yellow dust” mushrooms, which are common in the northeast American states. And yes, they are TOXIC. Great.

Amanita…why did that name sound familiar? Because it sounded like the biological name for the  Destroying Angel, or Amanita bisporigera, one of the deadliest mushrooms around! These nasty little buggers can mimic the benign and tasty puffball in their early stage before they blossom out into the parasol shape in the picture.

They contain a poison called amatoxin, which interferes with messenger-RNA and causes irreversible liver and kidney damage within hours. As little as half a mushroom cap is fatal.  Victims have been saved by intensive medical intervention which included hemodialysis, swallowing activated charcoal and IV penicillin. Some medical evidence suggests that extracts from the milk thistle may work as an antidote because they destroy liver toxins.

Better to know and avoid! But let’s not stop there.

At the age of 8, I lived with my grandmother in Sweden for nearly 18 months. My uncle, Robert Syk, a polymath, who had successful careers as a architect, musician and literary author, had a passion for mushroom picking. (A popular pastime in Scandinavia, Poland and the Baltic countries.) On walks through the woods on Muskön (Musk Island), he taught my cousins and me which ones were safe to bring home and eat – and more importantly – which were not. The most dangerous mushrooms he showed us was the deadly toadstool, otherwise known as Amanita muscaria or the fly agaric.

Swedes have a thing for toadstools which show up in pictures, design images even as Christmas decorations – no doubt due to their beautiful red and white polka dot motif. Many years later I read that Russians actually EAT toadstools. Boiling them twice weakens their toxicity and removes their psychoactive properties. I guess those long winters are pretty harsh and when you’re looking at starvation but …holy ergot!

Yes, readers, it turns out that the fly agaric has hallucinogenic properties, much prized as an entheogen by the indigenous people of Siberia and the Sami, the Arctic people of Scandinavia. In other words, to open Huxley’s spiritual doors of perception.

Argh! Do not eat!

The orange mushroom infestation exploded over the weekend, sprouting up all over our grass made swampy by the heavy September rains. Fortunately by Thanksgiving, they were gone. What next, I wonder.