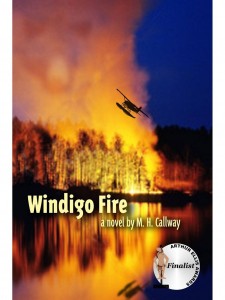 Read the first chapter of Windigo Fire,  published by Seraphim Editions, September, 2014. Windigo Fire was a finalist for the 2015 Arthur Ellis Award for Best First Novel and under different titles, short-listed for the Unhanged Arthur and the CWA Debut Dagger Awards.

Windigo Fire is available in print through Amazon, Barnes & Noble, Chapters/Indigo and in public libraries. It is available as an e-book on Amazon Kindle.  You may also access it through Kindle Direct’s library program.

Evil exists and he was no better than the others. He knew that now.

Danny Bluestone twisted the spliff in his nail-bitten fingers, feeling the weed roll under the thin white paper like twigs and pebbles in a stream. Couldn’t bag any decent bud this morning, so he’d settled for homegrown. Go organic. Support local industry. Smoke only nature’s own Red Dog Gold.

Midnight on Fire Lake, stuck on an island deep in the forests of Northern Ontario. Fifty miles from the nearest town – if you’d call Red Dog Lake a town. The raucous sounds of the hunters funnelled down from the lodge buried in the thick woods behind him. He breathed in deeply, letting the pungent pine sap purge his spirit of their meaty white presence. Clear the landing. Get ready for takeoff. His Zippo lighter rested heavy and cool in his hand.

Under the rising moon, the black silhouettes of the pines fringing the shore were etched as sharply as crystal, and Fire Lake had morphed into a silvery flat expanse. He wet the end of the spliff, straining to hear the eerie banshee call of a loon.

When he was a little kid, and his dad was still alive, they’d flown in here to fish for trout. The birds’ snaky black shapes had been common at twilight when they’d camped on the island, but today he hadn’t seen even one. And no fish in the acid clear waters of the lake.

No animals. No nothing.

He started, barely rescuing the Zippo from sliding into the dark water at his feet.

“Come out, come out, wherever you are.”

Like all day he’d been the invisible man. Now when he needed to be alone, trust them to whine for entertainment with him as the target. He hesitated, thumb on the lighter. Noises travelled in the still night air.

“Maybe he sprung a leak.”

Drunken titters. What if the smoke of his smouldering joint travelled, too? Would the hunters’ campfire mask it? They were using that stone oven on the veranda, the one that looked like a ripe beer gut. Dangerous, but way out here who was around to see? Sparks poured up in a fountain from the stove’s chimney and drifted over the tops of the trees.

Damn, Danny thought. All along Highway 11, from Temagami on up to Red Dog Lake and Cochrane and beyond, the white forest fire signs were cranked to red on the dial. Extreme hazard. No camping. Especially no fires. The sharp-needled powdery ground under his bare feet was so dry that it crackled.

“Hey, where is the little jerk?”

That was Ricky, the American with the shaved head, the one who claimed to be some old rock star. His voice had a dark edge, matched by a flicker of something Danny had spotted in his small blue eyes this morning when they’d hit the island. Like he knew the joke and you didn’t, and the punch line wasn’t going to be pretty.

“Maybe hunting guides in Canada don’t like getting paid.”

“Sure they do.” That was the flustered, placating voice of the older guy, Morty Gross, who had some political job down south in Toronto. “Danny’s off being a native, some spiritual thing. Like I promised you. Authenticity.”

“Sure you did, and a load of other bull.” Ricky sounded closer.

Danny scrambled up and jumped lightly onto the rock face behind him. The heat of the August afternoon lingered in the ice-smoothed stone. He crept up its clean bare surface, climbing till he reached the thicket of blueberry bushes he’d scouted out earlier. From here, he could spot them easily enough, and they’d never see him.

“Oh, Danny boy, the pipes, the pipes are calling.” Ricky emerged from the trail, a bulky dark outline against the shimmering water. “Maybe he’s watching us. He conned you, Morty.”

“You wanted a native guide, I got you one. He came highly recommended.”

“By you, no less. Turn around, I got some business here.”

Danny heard the rasp of Ricky’s zipper. Oh man, he thought, I have to drink out of that lake. All day long Ricky had been watering the blueberry bushes like a dog making his mark. Like toilets were for weaklings.

“Tell me you enjoyed the show,” Morty said.

“Look, I got us something to celebrate. Two words. Single malt. The best, used to be flown in special to the lodge, OK?”

“So don’t disappoint me.”

Morty coughed out a laugh, like he still had control of the party, and vanished back down the trail. Ricky sat down on a boulder by the shoreline, merging into the night.

I hate this job, Danny thought. Forget the money. Working at the stupid children’s camp wasn’t so bad compared to this. I want my old job back. Even though I’ll have to beg for it.

He glanced down at Ricky and tucked the joint and lighter into his shirt pocket. He loved the crisp crackle when a spliff first caught fire. He could almost feel the acrid burn of its pungent smoke, resin and tar coating his lungs, almost see its end blossoming, shedding sparks into the night.

He pulled a plastic baggie from his jeans. The mushrooms were shrivelled ugly things, like shreds of dark flesh, but they were quiet and didn’t cast an odour. Doing ’shrooms wasn’t smart since he ought to stay alert, but …

He ate his usual number.

An ice-age boulder had carved a natural hollow into the granite beneath him. He settled his back into it and waited. He’d be safe enough up here. Unlikely to roll down into the water or anything.

“So give the nice bottle to daddy,” Ricky said, reaching out a heavy arm.

This is what I get for studying English Literature, Danny thought. Government gave me free tuition for a useless degree, a one-way ticket to that crumby counsellor’s job at the kids’ camp. Take it or go back on pogey like every other Indian round here. Some choice. He breathed quietly, waiting for Huxley’s doors of perception to open.

He could never tell when he’d crossed the threshold. Back in college, he’d be wide awake, thinking he’d been sold Campbell’s mushroom soup, then he’d meet one of Hunter S. Thompson’s lizards on the Toronto subway, sitting there in plain view, reading the paper or something.

Even this long after sunset, the day’s heat seeped from the smooth stone into his back. That’s what they used to heat their houses in Scotland, wasn’t it? Rocks. Once upon a time, he’d wanted to study at the University of Edinburgh, to visit the Isle of Mull to see if he could spot ex-Beatle Paul McCartney. Stupid, right?

“This isn’t single malt, you liar,” Ricky said below him.

“It’s rye to tide us over.” Morty sounded desperate to turn the insult into a joke. “Our friend Anderson, the Norwegian, is looking through our supplies. It’s here, I swear. Where could it go? There’s no way off this island.”

“Maybe it’s taken a walk with your guide.” The beach pebbles screeched under Ricky’s feet as he stood up. “Where’s your Aussie pal, Hendrix? I’m thinking it’s time for me to get in some crossbow practice.”

Fear erupted through Danny’s chest, but he was falling into the soft fist of rock, tumbling, plunging into the clear lake water. It parted in fronds like syrup, till he stared into the droopy grey face of Old Devil, the trout monster of Fire Lake. Oh God, I’m drowning, he thought. Breathing water without knowing it. Or was he? Huxley’s one-way door had closed and he was lost in the funhouse of perception.

From afar, Morty’s voice: “Here comes Anderson. He found it, so make nice.”

“Yeah, right, after he helped himself.”

“See for yourself. The seal …”

The seal … Danny gazed up at its vaporous grey form in the clouds. The hard ground left his back, and he was lifting off, soaring on an iridescent dragonfly that droned through the air. Fire Lake fell away like a sheet of dark metal and they shot past acres and acres of green forest, wilderness as far as the eye could see.

No light penetrated through the trees. Their branches arched over him, forming a dark cave. Something stirred, a matted black bearskin that rose from the ground and took form. No flesh, no bones. Only darkness behind its eye holes. He pressed his face close to the black snout – still moist – and asked it what it wanted.

Are you a spirit?

Black ooze crept from the eyes. The white teeth parted and the stench of decay rolled over him.

He buried his face in his hands, but tears were useless. Nothing would make it better. Ever.

Shivering and wet with dew, he sat up. His back and muscles ached from the cold rock that had drained the warmth right out of him. A thick blanket of white mist lay over the water, obscuring the dawn, drawing colour out of the world. Was he still ripped? He rubbed his face, shook his long hair. Standing up shakily, he felt a surge of telltale nausea, the flu-like fatigue that would dog him for three days.

The ’shrooms must be done. Must be morning.

He stumbled down to the slate-grey shards of the beach where he’d been sitting last night. A flash of gold. Something was floating in the water, bobbing gently with the wavelets slapping the stones.

He blinked. What was it? A dead fish? Without thinking, he waded into the lake to get a closer look.

A white arm stretched out through the clear water, fine blond hairs waving like seaweed, fingers spread like a starfish above a gold-linked bracelet.

Oh, hell, Danny thought. His throat was parched but his feet were icy cold. He scrambled back out. It’s a flashback, that’s all. A mirage.

Heart thundering in his thin chest, he staggered down the trail to the lodge. Darkness slept under the trees, the way he’d dreamed it last night. Utter silence except for his panting breath. Too early, too early, he chanted silently. He’d find the hunters asleep. Remnants of the ’shrooms lurked in his system. He couldn’t be sure about reality just yet.

He reached the clearing.

He smelled it then, the metallic slaughterhouse reek of blood.

Images, but no focus.

The hunters were lying all over, splattered in garish colours. Humans couldn’t bend that way, could they?

A screech of panic tore out of his throat. The screams kept bursting from deep within, and he couldn’t stop them even when he clapped his hands over his ears to shut out his own noise.

No one knew where he was, except Rachel, a ten-year-old kid back at the children’s camp. The bush plane wouldn’t be back for two days.

And, like Morty said, there was no way off the island.

To find out what happens to Danny, download Windigo Fire from Amazon here.