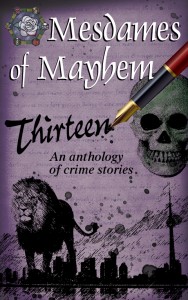 Thirteen is the first anthology of the Mesdames of Mayhem, featuring stories by 13 of Canada’s leading women crime writers. The collection contains one Derringer and two Arthur Ellis finalists.

“Amdur’s Cat” is my comedy thriller based on my working experiences with the government – and on the antics of a notorious Toronto mayor.  Which incidents are true? I’ll never tell!

Read and enjoy the opening pages!

On a snowy December night Benjamin Amdur saw a lion. It was gamboling about like a kitten swatting at the fat, wet snowflakes that tumbled through the dark. Right in the centre of Riverdale Park by the children’s wading pool.

Under the lamps of the park’s snowy pathway, the lion’s tawny fur glowed like the back of an old velvet sofa. For a brief moment – that gap between the surreal world and biting reality – he watched Rousseau’s painted lion come to life.

Then he remembered the sleeping gypsy – the minstrel who was about to eaten.

He grasped the icy black iron fence beside him. The house it surrounded lay dark. At two in the morning, its inhabitants, like most normal people, were in bed. By the time he woke them up screaming for help, the lion would have torn out his throat.

With infinite caution, his eyes on the animal, he edged back into the shadows of Winchester Street, the road he’d weaved down moments before. Behind him, three blocks away, lay Parliament Street with its strip bars, eateries and mini-marts. Surely to God one of those places had to be open!

The lion leapt in the air. It snapped at the snowflakes as they fell. He heard the crunch of its jaws, saw the flash of its teeth. Its tail lashed back and forth.

Then it paused, raised its huge head and sniffed the air. Its nostrils twitched.

Adrenalin buoyed him up for the first few feet but deserted him almost immediately. He was forty-eight and twenty pounds overweight. His regular habit of walking to work did nothing to bolster his panic-stricken need to run. He tore down the slushy sidewalk, his mind fixed on the zebras of the veldt. Zebras who ran far more swiftly than he. Zebras brought down and eviscerated alive…

By the time he reached the yellow lights of Parliament Street his chest was heaving. He doubled over, gasping for oxygen. If the lion got him now, he was dinner. But he couldn’t take another step.

He looked frantically up and down the street. Every storefront was dark.

No buses, no taxis, no cars.

Then he spotted an angel standing under a streetlight a few yards to the south. Well, not an angel exactly, but a young police officer, her uniform immaculate, the brim of her cap spotless, her leather boots and gun holster gleaming with polish.

He summoned his remaining strength and stumbled over to her. “Oh, thank God…an animal…danger…” He couldn’t stop panting. “Very dangerous. Over by …Riverdale Farm.”

She raised a tidy eyebrow. “Are you quite all right, sir?”

“No…no, I’m not all right.” With the dispassion of his medical training, he estimated his heart to be thumping at 180 beats per minute. His blood pressure didn’t bear thinking about. “You…help…must get help.”

“How much have you had to drink tonight, sir?”

“What?” Finally he caught his breath. “Please, you don’t understand. There’s a bloody great animal running around loose. It’ll rip someone apart. We have to stop it.”

“Your ID. Now!” Her hand moved toward her baton.

Amdur dragged out his wallet and handed her his driver’s license. Her laser stare burned through its laminate cover.

“Dr. Benjamin Amdur.” She studied his face with more than an element of disbelief. “So you’re a doctor.”

“Yes, I’m with the Ministry of Health. I’m Assistant Deputy Minister in charge of OHIP.”

That made no impression on her whatsoever. “OHIP?”

“Your, I mean, our free medicine in Ontario. Look here, we’re wasting time.”

“How many drinks have you had tonight, sir?”

“What the hell does it matter? I was at a Christmas party, for heaven’s sake. At the National Club.” That lofty name made even less impression on her. “I tell you I know what I saw. There’s a lion on the loose.”

“Where? Where did you see it?”

“In Riverdale Park, by the children’s wading pool…the farm.”

She shoved his license in her tunic and tore down Winchester Street, leaving him standing there like an idiot. He chased after her, but she set a blistering pace. He only managed to catch up with her at the edge of the park.

Amdur squinted through the heavy curtain of falling snow. Where was the beast? Where was it? The grounds of the park stretched out before him, white and featureless under the thick drifts.

To read the rest of the story, download your copy of Thirteen from Amazon.