Here at last is my blog on Ride #3. (Spoiler alert: I did successfully complete my four pledged rides for a total of  200 km!)

Tuesday, August 24th I headed west to the Humber River one of my favorite trails.  Getting there from mid-town Toronto unfortunately requires a hair-raising pedal through traffic.  I started out early to beat the  promised scorching heat.  The first few kilometers were along the cool shade of the Beltline trail.

The Beltline trail follows the path of a commuter railway that opened in 1892.  It never turned a profit and only lasted two years. For almost a century afterwards Torontonians wrangled over how to use the land until David Crombie, Toronto’s tiny perfect mayor, turned it into a bike path. (If you’re having a sleepless night, you can read the detailed history of bureaucracy and indecision here. )

As a runner, I was familiar with the Kay Gardner section that runs from Mt. Pleasant Cemetery to the Allen Expressway. There my buddies and I would literally “hit the wall” before looping back, 11 km roundtrip from the Pearly  Gates on Bayview. I ran across the York section west of Allen Road purely by accident, actually coming east from the Humber. The access from the west is well hidden down a narrow sidewalk past an auto bodyshop and as The Hitchhiker’s Guide to Galaxy would say behind the sign saying “Beware of the leopard”.

The York Trail is belied by the overgrown entrance. It’s actually quite exposed and bland, running as many rec trails do, under a set of hydro wires and pylons. But behind a set of industrial buildings, there’s some neat street art.

At the end of the Beltline, I pedal back along Bowie to Montgomery and cut through Prospect Cemetery, which bears a striking resemblance to Mt. Pleasant Cemetery, which is hardly surprising since they were designed by the same people. Prospect is bigger than Mt. Pleasant, consisting of three pleasantly green sections to ride through despite a steep climb midway.

You might think that Prospect provides a lengthy stretch in which to contemplate one’s own mortality, but death is far more imminent on the next part of my route which follows St. Clair Avenue west until it ends at Scarlett Street.

There are no – and I mean NO – accommodations for cyclists along busy St. Clair. Stay alert, stay alive. I watch for car doors opening, street car tracks and open air patios that have narrowed the thoroughfare to one lane. In some sections, I beat a retreat to the sidewalk.  Better to be humbled into walking with pedestrians than blending in with the traffic in a grisly way.

I’m much relieved to turn onto Scarlett Street and its bike path. It’s a speedy downhill ride for the most part to the quiet refuge of the Humber River trails.

The northern parts of the trail are wilder and susceptible to flooding. One spring, a cycling team mate and I watched an enormous snapping turtle swim across our path.

In 1954, Hurricane Hazel struck Toronto with winds of 115 km/hr. The Humber, Don and Rouge Rivers overflowed and killed 81 people, destroying nearly 2000 homes. After this disaster, Toronto no longer builds on floodplains and developed an early warning weather system.  Today though the trail is dry. I say hello to the few hikers and wave to the kids at a bike camp.

The Humber Trail has a general downgrade interspersed with some short steep hills.  Long sections are being rebuilt in the section north of Old Mill Road. I’m glad that my trusty bike is a hybrid and that Ed pumped up my tires as I negotiate the gravel and mud.

South of Old Mill, the trail gets challenging with two heart thumper climbs out of the valley. There’s a short section that detours through city streets before I reach my midway point and the last part of the Humber trail.

It’s now a downhill zoom through a wood and field flowers. One of my fav features along the trail is the Oculus, a UFO-inspired 1950s pavilion designed by British architect, Alan Crossley, and engineer, Laurence Cazaly.  Over the years, Oculus had been defaced by tag graffiti and the City considered demolishing it. Happily, in 2019, it was saved. It’s now an art installation complete with alien graphics. (See pics below.)

At the pedestrian bridge by Palace Pier, I turn east for the 15 km journey along the lake shore.  I pass a kid-friendly dinosaur playground. Along the way I pass one of Toronto’s saddest ghost bicycles, a memorial to a 5 year old boy killed when he fell into Lake Shore traffic.

It’s full sun by now and 30+ degrees. Too hot even for biking. No free Perrier today at Ontario Place. At Balzacs in the Distillery District,  I treat myself to an iced coffee before taking my usual route home: up Sherbourne through Summerhill and Mt. Pleasant cemetery. 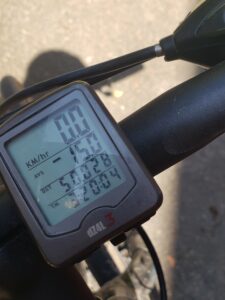