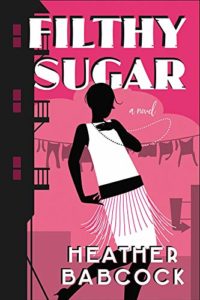 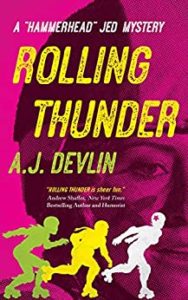 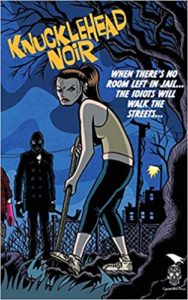 Strange times, readers. But happily, at long last we can attack our TBR piles. Definitely time to indulge in feel-good literature even when one is drawn to the dark side – and noir.

The answer? Black humour and you will find plenty in the terrific anthology, Knucklehead Noir ( Coffin Hop Press) edited by Robert Bose and Sarah L. Johnson. The byline says it all: When there’s no room left in jail, the idiots will walk the streets. Believe me, when you’ve finished these 15 stories (most new, some reprinted)  by leading Canadian and American noir authors, you will feel much better about your own life, family, friends, job and COVID-19.

Leading off these tales celebrating idiots is one of my personal favorites, “Two Kangaroos Chained to a Piss Pot” by Jason Pearce. Angus arrives home with the Christmas gifts he made in jail, like the shiv his little brother can use as a toothbrush. Handy! But when he robs his local grocery store of beer and smokes, things go awry in the most Canadian way.  “Honeymoon Sweet” by US screenwriter, Craig Faustus Buck, is the Macavity award-winning tale of marry in haste, repent at leisure. The same warning continues in “Work at Home Opportunity! Perfect for Single Moms” by Laurie Zottmann. Single mom, Chucky Jensen, struggles to sell stolen yoga pants at her kid’s school fair while fending off bitchy competitors and hiding the freshly dug hole in her garden from her nosy neighbour cop.

Golden Derringer winner, Michael Bracken, pens a cautionary tale about wannabee robbers of adult stores in “Sex Toys”, but Pamela Kenney gives us hope in “All in a Day’s Work”. You may change your fate if your kidnappers are dumber than you.  The criminals in Chris R. Young’s story, ” Thick as Thieves”, are certainly thick. They mess up a job -no kidding!- and get caught in a hilarious twist of fate.

More inept wannabees appear in Tom Barlow’s, “Hic”. Andy tries to outdo his jailed brother, while sleeping with his brother’s devious ex, but his nerves set off a fit of hiccups and disaster.   Jaclyn Adomeit’s story, “Scratch and Sniff”, skillfully blends suspense and humour in hero Nathan’s quest to smuggle drugs into an oil drillers camp. And the sad irony continues in Brent Nichols’ “Go Fish”, where a poacher steals a drowning victim’s cell phone only to find out that the vic has powerful friends bent on a watery revenge.

Another personal favorite is “Johnny Money”, by Steve Passey, where hardened gangster, Johnny, looks out for his vulnerable younger brother, Ricky. American noir author, Steve Brewer, shows his humorous side in “Cemetery Plot” where a trio of idiots try to kill each other off in a graveyard. Convenient because who looks for a murder victim in a cemetery?

Events turn downright bizarre in the cross-genre story “Soft Opening” by Will Viharo. Porn merchants learn that it’s never a good idea to cross an alien.  In “Beer Run” by Scott S. Phillips, Radio Ketchum fights to retrieve a beer shipment stolen from his terrifying mother’s bar. And in Axel Howerton’s “The Aluminum Eagle”, we travel back in time in a thoroughly enjoyable homage to Frank Sinatra and the Rat Pack. And rounding up the collection is the flash story, “Liner Notes” by editors Sarah and Rob where a hapless photog learns the hard way that his pics may be a goldmine, but not in the way he dreamed.