I was delighted to be a guest on Lisa De Nikolits’ Goodreads blog, Interview with an Author on May 2nd. Lisa is the award-winning author of eight novels and numerous short stories. Her work leans to the dark side and the weird – which is why I love it! It’s crime fiction which explores mystical and philosophical issues. Highly recommended! Her most recent novel is The Occult Persuasion and the Anarchist’s Solution.

In our interview, I tell how a scientist with a business degree ended up writing crime fiction and I share some of my life experiences that led to Windigo Fire. Read it here. 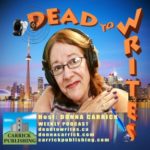 I was also delighted to be Donna Carrick’s guest author on her 70th episode of  Dead to Writes on May 17th. Our interview is on Zoom so you can see and hear us talking about crime fiction, my writing and the Mesdames of Mayhem, the author community that Donna and I co-founded.

Saturday, April 29th was the third annual Authors for Indies, a day on which authors and booksellers together celebrate independent book stores. In previous years, I’ve had a great time at Books and Company in Picton and Book City at the Beach in Toronto.

So imagine my delight when I learned that the Village Bookshop in Bayfield was one of the participating indie bookstores this year. Bayfield lies 10 minutes south of our family cottage in Goderich (of tornado infamy) and this was a great opportunity to meet some Huron County writers.

The Village Bookshop has a fairy tale setting in the heart of Bayfield, one of the prettiest towns in Ontario. Many years ago, this lovely yellow building housed a bakery and tea room. Sadly, it closed, but happily The Village Bookshop moved in. Golden hardwood floors, an eclectic mix of books for all tastes, a children’s play area and an emphasis on local authors -what’s not to love!

Bayfield’s bookstore has a long tradition of supporting authors. A few years ago, my friends Cathy Astolfo, Janet Bolin, Alison Bruce, Mel Campbell and I had a wonderful time as authors at a mystery-themed literary festival.

I joined local mystery author Judy Keightly and Andy McGuire, poet and new father, in meeting local readers. Windigo Fire sold out immediately as well as all my consigned copies of Glow Grass and 13 O’clock. (Should have brought more!)

In between writing mysteries, boating as well as creating and producing plays with Bayfield’s community theatre, Judy and her husband are embarking on a new adventure. They are the new owners of a vineyard. Huron County promises to be the next wine-growing region of Ontario. 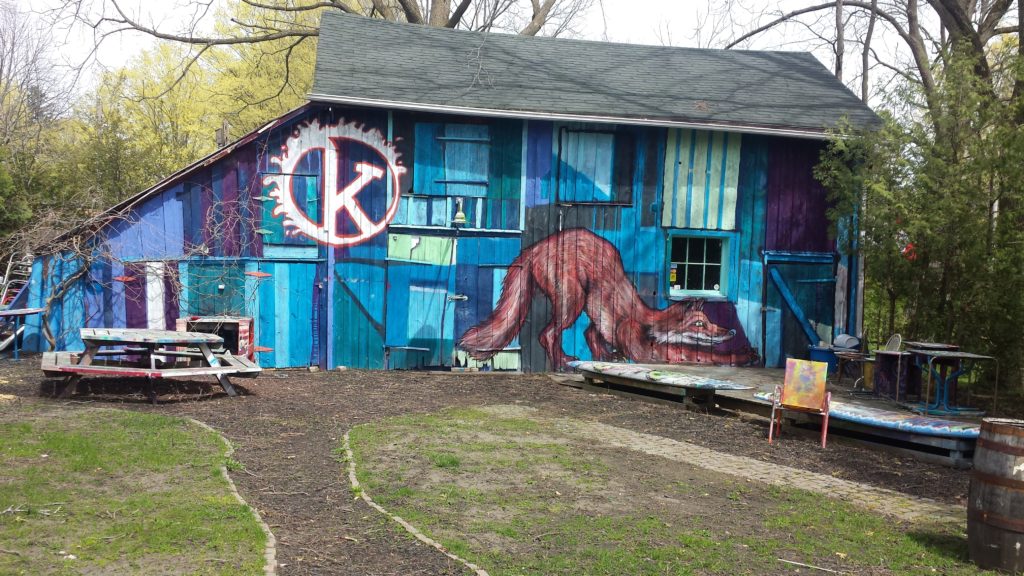 The Village Bookshop shares space with an artist who teaches painting during the summer months. Luckily, the only fox in the area is the one decorating the studio wall because Martha owns a brood of chickens who provide fresh eggs every second day. A pretty, fluffy-feathered breed, Martha has named each bird after a distinguished author.

My personal favorite was Munro named after Huron County’s most distinguished local author: Noble prize winner, Alice Munro who wrote her world famous stories in nearby Clinton, Ontario. Martha let us in on a secret: Ms Munro slips into The Village Bookshop from time to time to sign her books.

Next time you are visiting the Grand Bend or London area, drive a few miles north and Eat the Local Books in the Village Bookshop.

The media’s consensus is that 2016 was the Year of Crap.  Mad violence, racism, gender wars, the sanctioned rise of tyrants and unbridled greed, more wars…nice, huh? No wonder so many crime writers are turning to noir. Makes me  proud – and relieved – to be a Canadian.

Despite the mayhem on earth, 2016 treated my family, friends and myself pretty well. One of the biggest highlights was my 9th Ride to Conquer Cancer with my best buddy, Marc, in support of cancer research at Princess Margaret Hospital.  The doctors, medical staff and researchers at PMH are truly the A-team. Because of them, many of our friends have beaten back this horrible illness and continue to live happy and fulfilling lives.

I devoted much of 2016 to building my social media presence via my website and Twitter.  Blogging has been immensely freeing, allowing me to explore and share my love of street art, travel and the weird and wonderful. Readers around the globe and as far away as Macau have visited here though most of my followers live in Canada, the USA, Brazil and Germany.  As of now,  I have 1600+ followers on Twitter: mostly fellow writers or fans of crime fiction and street art.

Windigo Fire continues to draw interest. Seraphim Editions sent me my first royalty cheque, which was more than my initial advance. Wow! I also received my first payments from Public Lending Right (libraries) and Access Copyright. In December, I learned that WF was being studied by a high school English class as an example of Canadian literature – and the teacher invited me to meet his students in the New Year.  Will the students be scarier than a roomful of hostile IT clients??? 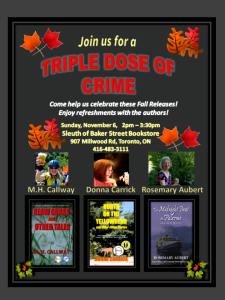 In November, Carrick Publishing released my latest book, Glow Grass and Other Tales, a collection of my published short stories and novellas. My friends, Rosemary Aubert, Donna Carrick and I made it a Trifecta launch at our favorite bookstore, Sleuth of Baker Street. We packed the store with friends, family, fans and well-wishers.  And all three of us sold out our supplies of books!!

This year I participated in 20+ author events, flying solo or teamed up with fellow crime writers through our group, the Mesdames of Mayhem or with Crime Writers of Canada. I gave several workshops on How to Get Published at the Toronto Public Library as well as at my friend, Rosemary McCracken’s Novel II course at George Brown College. And I attended three literary conferences – whew!

Left Coast Crime in February in Phoenix, Arizona was terrific. I was honoured to be on the short crime fiction panel and I partied with new and old friends at the Short Fiction Mystery Society reception, Noir at the Bar and the Meet the Canucks event hosted by CWC.  I met two of my favorite authors, Ann Cleeves and Tim Hallinan. Even fitted in a sightseeing tour of wild west ghost towns and rattlesnakes! (See my previous blogs on both subjects.)

Limestone Expo in Kingston, Ontario last July, was an intimate, multi-genre festival organized by horror author, Liz Strange.  Ed and I made a fun weekend of it, staying at a haunted B&B, the fab Rosemount Inn and connecting with friends, old and new. I was delighted to share a table with speculative fiction author and aardvark lover, Ira Nayman, who in another life was our daughter’s film professor at Ryerson University! Thoroughly enjoyed being on the multi-genre panel, Monstrous Imaginings.

Bouchercon 2016 took place in September in New Orleans, Louisiana.  The exotic location drew in thousands of crime fiction authors and fans from North America and overseas. Easy to get lost in the crowd as a newbie Canadian author, but also great to be in the Mardi Gras parade, to nom down Creole treats at publishers’ events and to hear some of the best Noir writing ever at the Voodoo Lounge. (See my blog on Bouchercon) And during the swamp tour, we learned that gators love marshmallows!

Highlights included interviewing Hank Phillippi Ryan on behalf of Toronto Sisters in Crime, meeting Peter Rozovsky, the founder of Noir at the Bar and dinner at Arnaud’s with friends and fellow authors, Mar Preston, Nancy Cole Silverman and Ellen Kirschmann. Thanks, too, to New Orleans detective and award-winning crime writer O’Neil de Noux for organizing the Short Mystery Fiction Society lunch at Napoleon’s.

NaNoWriMo in November got me back to doing what writers are supposed to do: to write. Under the guiding hand of my friend, TO Poet, I hunkered down and got to work.  Impossible to match TO Poet’s staggering output of 75,000+ words, so I settled on a focused approach this year and drafted two short stories and more chapters for the WF sequel, Windigo Ice.

December was devoted to family, friends and Christmas. Much to look forward to in the New Year. Several public events coming up as well as friends’ book launches and Left Coast Crime in Hawaii and Bouchercon right here in our own city of Toronto.

We Mesdames of Mayhem will be releasing our third anthology, 13 Claws, featuring dastardly, animal-centred crimes. For the first time, we have a contest to discover one or more authors previously unpublished in the crime fiction genre. Stay tuned and hope we survive 2017!!