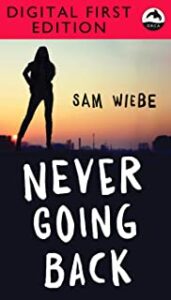 Novellas are relatively rare in crime fiction where formats are far more rigid than in literary and speculative fiction.  Short story lengths greater than 5000 words are tolerated…barely. And novels must be no less than 65,000 and no more than 95,000 words.

No doubt the formats are dictated by business rather than artistic imperatives. The story or book length a publisher believes will hold readers’ attention spans.

So what is a novella exactly? A long story or a short novel? As an author whose work naturally tends to fall in this category,  I believe a novella is a story with a linear plot but with more texture, atmosphere and complexity of character than can be captured in 5000 words or less.

The Orca Rapid Reads Series  breathed life into the crime fiction novella. Mostly because of this series, the CWC Awards of Excellence have had enough entries to create and sustain a novella category. (CWC defines a novella as a story between 8000 and 20,000 words.)

The Rapid Reads series is aimed at adults who are ESL students, who have difficulty reading or those who simply want a fast satisfying read. Although the language is uncomplicated, the books are not simplistic. They are hard-hitting, with adult themes and they often focus on social issues.

It’s a challenge for an author to streamline their writing style without losing its essence. That’s why Orca contracted with leading Canadian crime fiction authors for the 68 books in the series, including my friend, Sam Wiebe.

Sam’s novella, Never Going Back  (Orca, 2020)  is one of the latest books in the Rapid Reads series.  Its protagonist, Alison Kidd, is a tough young woman, a master thief who’s just gotten out of jail. She hated prison and she’s determined to go straight, but the local crime boss blackmails her into pulling off a risky job. If she refuses, her brother will be killed. Can she outsmart her old boss and save her brother and herself?

Sam’s hard-hitting, critically acclaimed Dave Wakeland series and his debut novel,  The Last of the Independents, are both written very much from a man’s point of view. I was intrigued that Sam chose a woman hero for Never Going Back. Could he pull it off?

I’m delighted to say that, yes, Sam did! Alison Kidd is a terrific and likeable character.  (More books and stories with strong women, Sam!) The plot has the twists and turns of a switchback highway and the suspense that goes along with it. An excellent thriller!