I’m delighted to announce that I have a new story in Coffin Hop Press’ noir anthology, The Dame was Trouble. The collection features stories by leading Canadian women crime writers – and every story features A Dame.

My story, “The Seeker”, stars Terry Snow, a tough 62 year old who handles fast cars, guns and gangsters to find her missing son. 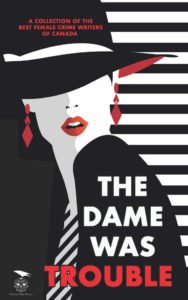 The Dame was Trouble was released this August and is available in print and e-book on Amazon.ca.

And 13 Claws struck gold at the Arthur Ellis Awards with a win by friend and fellow Madame of Mayhem, Catherine Astolfo for her story, “The Outlier”.

This is a tale so noir, Jack Batten, the Toronto Star critic said: Catherine Astolfo’s story involving a pig, for example, offers an intriguing way of giving Paul Bernardo himself a case of the chills.

Not to forget that we received THREE further nominations for “There be Dragons” by Jane Burfield and “The Ranchero’s Daughter” by Sylvia Warsh and my own novella, “Snake Oil”, about which Jack said: M. H. Callway’s tale mixes snakes and the real estate business in a way that will make readers run a mile from both.

And as it this wasn’t enough, I’m delighted to share that both Cathy and Sylvia’s stories were long-listed in Otto Penzler’s  Best American Mystery Stories for 2018!! 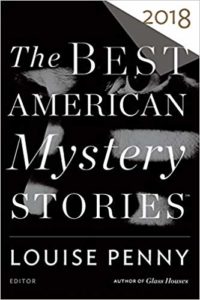