The most successful novels are sparked by their authors’ passions. What passion did you follow in Raven Lake?

Gliding in my kayak over a quiet lake or creek, preferably one with no cottages, I feel completely plugged into nature. I come upon turtles sunning themselves on logs; loons teaching their chicks how to fish; herons blending in with marsh vegetation as they stalk their suppers; mink and bobcats drinking from the edge of the lake. One day, I rounded a bend in a creek and found a young bear fishing. Surprised to see me, he scrambled up the bank and disappeared into the woods. 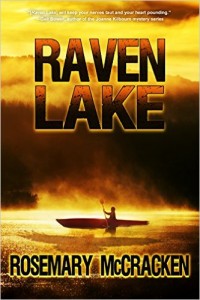 So it was mandatory that I get Pat into a kayak—and, of course, she loves paddling as much as I do. And when Imajin Books asked me for suggestions for the Raven Lake book cover, I immediately thought of a figure in a kayak. I was thrilled with the cover that artistic director Ryan Doan came up with—complete with the shadow of a raven on the water. The back cover has a flock of ravens—an “unkindness” of ravens is, I believe, the collective noun.

I set Raven Lake in Ontario cottage country in the summertime to celebrate my many wonderful summers in the Haliburton Highlands north of Toronto—God’s country, it surely is! During those months, I spent a fair amount of time in my kayak exploring the lakes of the Leslie Frost Centre, a spectacular 32,000-hectare Crown land nature preserve that was accessible from my cottage.

Did you revisit any favourite topics in Raven Lake?

In Raven Lake, I took on a new financial crime based on a real scam that was plaguing Ontario cottage country two summers ago: cottage rental fraud. Con artists were posting photos of lakefront properties on legitimate internet vacation rental sites. Would-be renters would wire their money to the “property owner” – discounts were given for payment in full – and when they arrived for their vacations, they were told by the real owners that the property was not for rent.

Like Pat, I’m appalled by the financial exploitation of unsuspecting people that is rampant these days. Con artists are swindling their victims out of their savings through investment frauds, identity theft, telemarketing scams and loan schemes. The penalties for these crimes aren’t tough enough in Canada to deter these crooks.

Where can readers buy Raven Lake?

Click on the book cover image above. It will take you directly to the Amazon store in your country. And here’s the link, too: myBook.to/RavenLakeTierney

What do you like about the crime fiction genre?

Crime fiction gives me an opportunity to work with some great bad guys and gals, characters I can really love to hate. I believe the antagonist is the second most important character in a novel, after the protagonist. I avoid completely evil antagonists because I can’t believe in them. No one is bad all the time.

I like the sense of closure at the end of a mystery or thriller. Peace and order has returned to the world. It may only be a temporary state of order; the antagonist may still be out there. But it’s peace and order for a time.

Tell us about your readers. Where are they located? Which topics have proven to be the most popular with them?

Many of my readers are women, and judging from readers’ reviews, they seem to be taken with Pat Tierney’s ongoing family problems. They like the fact that she’s an Everywoman: a single mom who supports her family, does her very best for her clients, and has to deal with a whack of domestic problems. They can relate to a character like her.

The beauty of e-books is that authors can reach people who read English throughout the world. Safe Harbor, my first mystery, currently has 115 reader reviews on Amazon.com, and I think it’s safe to say that most are American readers. There are 15 reviews on Amazon.co.uk, so I know I have some British readers. And, of course, I have many readers in Ontario and I credit public librarians with bringing Ontario writers to the attention of library users.

Will there be a fourth Pat Tierney mystery?

I certainly hope so, although I’m not sure where Pat will take me next. I need to spend some quiet time this coming summer listening to her.

Where can readers buy the first two Pat Tierney novels?

Click on the images below or use these links: Safe Harbor can be purchased at myBook.to/SafeHarborTierney. And Black Water at myBook.to/BlackWaterTierney. These are universal links that will take you to the Amazon store in your country. 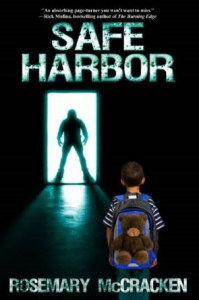 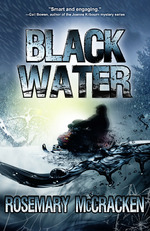