This June, Toronto Sisters in Crime welcomed Hank Phillippi Ryan as guest speaker to celebrate the 30th anniversary of SinC “mothership”.  I had the privilege of interviewing Hank Ryan on behalf of Toronto SinC last fall at Bouchercon in New Orleans. She is a delightful, warm person with a staggering list of accomplishments.

Hank has been the on-air investigative reporter for Boston’s NBC affiliate for 30+ years. For her ground breaking journalism work, she has been awarded 33 EMMY’s, 14 Edward R. Murrow awards and dozens more honours. She is also the bestselling author of nine mystery novels which together have earned five Agathas, two Anthonys, two Macavitys, the Daphne and the prestigious Mary Higgins Clark Award!

Throughout her career, Hank has worked to support women. She was 2013 President of the USA Sisters in Crime and is a founding teacher of Mystery Writers of America University. She also sits on the board of the Lyric Stage of Boston where she founded the “First Curtain” program to bring theatre to underprivileged students.

Hank lives in Boston with her husband, a renowned civil rights and criminal defence attorney.

How did you choose journalism as your career?

I grew up in rural Indiana. As a kid, I was bookish and nerdy. I had no friends so I read all the time. Books were my real friends.

I attended Western College for Women in Oxford, Ohio where I really came into my own. At the same time, I really had no idea what I wanted to be or do. I ended up studying English, majoring in Shakespeare while I minored in listening to rock and roll records. But while I loved college, I felt that I should be out in the world making a difference.

At first, I believed that politics was the best way to change the world. I was a political campaign worker and then a press secretary to a US congressman. Later, I put in a two-year stint at Rolling Stone Magazine where I worked on the political column “Capital Chatter” and even organized the coverage for gonzo journalist, Hunter S. Thompson’s presidential campaign. Then I decided that I could do more good on the other side of the microphone, asking the questions rather than answering them.

I love how you landed your first job in the media. Do share your story with us.

I simply walked into the newsroom of the biggest radio station in Indianapolis and asked for a job as a reporter. Back in the 1970’s, they didn’t have any women reporters working there. I mean no women at all. But we were also right in the middle of the Women’s Movement.

I argued with the news director. Every time he raised an objection, I shot it down. He kept telling me he couldn’t hire me because I had no experience. In the end, I pointed out that the station’s FCC licence was up for renewal and he told me the job was mine.

What inspired you to become an investigative journalist?

I always want to be a detective: to find out the truth. A journalist and a detective always seek out the hidden truth, the deeper story behind events.

As a journalist, I always ask: What is the real story? And I ask WHY? For example, why would that corrupt politician take the money? As an interviewer pursuing the truth, I ask WHAT IF? To illustrate, see how the reporter unmasks the priest in the movie, Spotlight.

How do you manage the stress of your job?

You’re right, the stress is there. You can’t last in this business if you don’t love it. I can never make a mistake. I can never call someone the wrong name, be late or have a bad hair day.

I truly love my job. I’ve battled hurricanes, floods and blizzards. I’ve wired myself with hidden cameras, chased criminals and confronted corrupt politicians. I’ve revealed mistakes in the 911 system that sent emergency responders to the wrong addresses, a failing jury selection system, firefighters given faulty equipment, corruption in the mortgage industry and unfair practices by powerful contractors. My work has helped to change laws, send criminals to prison, remove homes from foreclosure and to provide millions of dollars in refunds and restitution to victims and consumers. I’ve been able to change lives.

What led you to take up mystery writing?

As I said, I always wanted to be a detective. And I’ve been a lifelong mystery reader, starting with Nancy Drew.

I tell my readers and fans that I’ve really been writing for over 35 years. My first encounter with publishing was in 1969 when I had a summer job as a proof reader. I had to read the entire Indiana Code of Laws out loud.

But seriously, every day, when my team and I put a news story together, it’s like making a small movie. We start with nothing and at the end of the day we have a story. The only difference is that in my mystery novels the story that I’m telling is one that I’ve made up.

Tell us about your two mystery series. 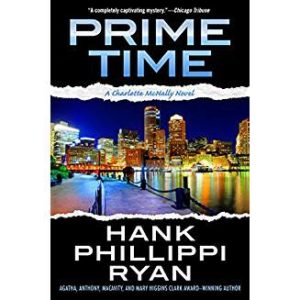 My first four mysteries featured Charlotte McNally, a Boston television reporter, who feels a lot like me but is separate from me. The first book in the series, Prime Time, won an Agatha for best first novel. I’m happy to tell you that the entire series is now available in all-new editions.

My second series centres on Jane Ryland, a TV reporter who struggles with serious personal and professional challenges. The first book featuring Jane, The Other Woman, won the Mary Higgins Clark Award as well as being nominated for the 2012 Agatha, Anthony, Macavity, Shamus and Daphne awards for Best Novel. I’ve written four more books featuring Jane, the most recent being Say No More, which was released November, 2016. 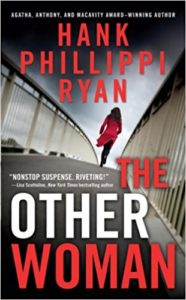 Tell us how you write. Are you a plotter or a pantser?

I typically write in the evenings between 7 and 10 pm and on weekends. I strongly believe that the truth behind my mystery’s plot must be consistent with the real world. And I make sure that my characters’ motivations are always consistent. Otherwise my readers will not find the story believable.

I would describe myself as a “pantser”. I have no idea where my story will take me: I never know who the murderer is until I get there. When I sit down to write, anything can happen and I look at that unknown with joy. If the story is real, the words will come. 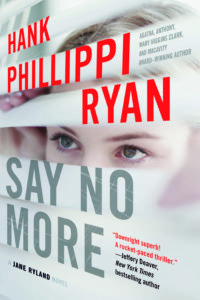 What brings you to Toronto, Canada?

Every year national Sisters in Crime sends speakers to selected chapters in North America and Toronto SinC was chosen for 2017. My husband and I have always wanted to visit Toronto and I’m very much looking forward to meeting my Toronto Sisters in Crime in June.

Hank’s visit was a huge success. For pics and details do check out Toronto SinC website and FB page.