Last winter, on a visit to Montreal, our daughter insisted we visit La Fete des Neiges, which is held in Park Jean Drapeau, the former site of Expo 67. I was overcome by curiosity.  What did the site look like now, nearly 50 years later?

Expo 67 was a Big Deal to Canada. It marked our 100th birthday. We had to to show the world that Canada was a real country, not just a British Dominion. History affirms we were successful.

I remember only snippets from our family visits to Expo: like the Sputnik chocolate ice cream sundae I enjoyed at the Russian pavilion. And the split-screen films re-introduced by the National Film Board.

Today virtually nothing remains. Nature has taken over. The site is covered by trees and bush. And the Fete des Neiges is sweet, low-key and family-oriented. Furries entertain the kids, people skate and snow tube and we enjoyed mulled wine and maple syrup poured on snow. Post industrialism lives!

Expo 67’s vision of our future seems absurdly rosy – even quaint.  Were we really expected to live in upside down pyramids, geodesic domes and Gaudi-like apartments? My friend Deb and her parents lived a year in the Habitat apartments as a future model family: isn’t that something to tell your kids? 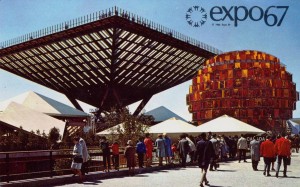 Wasn’t the future wonderful? It’s as though resources and land were infinite. Mind you, the burden of overpopulation isn’t acknowledged or envisioned even today.

Strange what has survived from Expo 67 and what has not. La Ronde, the amusement park, was considered tres low-brow and tacky. Well, folks, it’s still there and thriving!

And so, I’m happy to say, is my secret favorite, the American Pavilion.

I loved it! It had the longest escalator in the world at the time: 37 metres straight up. The monorail drove right through it! And I could watch the crop-dusting plane chase Cary Grant in North by Northwest over and over again. What was not to like?

Critics opined though the exhibits were vacuous pop culture. They wanted meaty hi-tech and military muscle.  They considered the dome a flimsy temporary construct of scaffolding and plastic that might not last the exhibition.

Well, they were nearly right. On May 20, 1976, the acrylic plastic sheathing caught fire and the pavilion burned up in 30 minutes. Here’s the video.

The steel lattice survived though. In 1990  Environment Canada created an environmental museum inside it. Today the biosphere showcases climate change, ecotechnologies and sustainable development.  Bio Bucky: Our real future!