Beautiful morning on Monday, August 24th for the third of my pledged four 2020 Rides to Conquer Cancer.

In Ride #2,  thunderstorms drove me back closer to home, so today my goal was to head west along the lake shore to the Humber River trail. But the best-laid plans…

I zipped down Bayview extension, passed the warning raccoon and opted for the section of the Don Valley trail that runs along the eastern edge of Bayview. I ride past the Brick Works (and the sadly closed Cafe Belong) down to Rosedale Valley Road.

Happily I discover that Toronto City has put in a bike path along Bayview itself as far as River Street. Traffic is a little hairy, but manageable.

Up the hill to River Street and the falling cranes thereon (read article here).  Scary to think that the day before the accident, my cycling buddy and I rode under this crane. Holy  dodging a bullet!

I zoom past the Toronto Humane Society, where I volunteered as a “cat groomer” many years ago then cross through the Canary District to get to Lakeshore.

Funnily enough the legendary Canary restaurant was one of the most celebrated dives in Toronto. Whenever we drove by it, I dared myself to eat there, but I never had the guts –ha, ha– to do it. The building has a storied history – warehouse, school, artist apartments – and even starred in films shot in Toronto. (I’ll be writing up the late, great Canary in a future blog.) 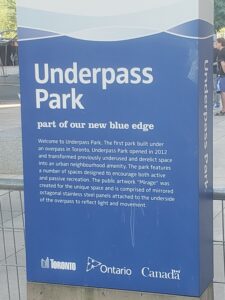 A new street through the Canary District takes you under the Gardiner Expressway. There I ran across Underpass Park, one of Toronto’s better efforts to beautify the  grottiness under the cement arches the raised highway. There’s a children’s playground and lots of interesting street art.

I carefully heed the pedestrian signals to avoid getting flattened by the mad traffic on Lakeshore Boulevard. All going well all, as I ride along the Queen’s Quay when thump, flap, flap, flap! It’s a sound cyclists know all too well – I’ve a puncture in my rear tire.

Punctures are an unhappy reality for urban cyclists. Bits of broken glass, loose screws, hard plastic, sharp rocks – all are lurking to destroy your inner tube. Earlier this season, I had a “snake bite” puncture: if you go over a curb too hard, the inner tube can twist and you get twin holes. Sigh.

I wheel my bike over to Balzac’s in the Distillery District and enjoy an early coffee break while awaiting rescue via Ed in the Mazda. Slight panic when the internet tells me that my usual bike shop has closed for summer holidays. Then I remember passing by GEARS bike shop on my way through Canary.  A short drive over after rewarding Ed with a latte. Terrific service – they replace my inner tube and I’m back in the saddle within 20 minutes.

By now, it’s late morning and the two-lane Queen’s Quay bike trail is bustling with MAMELs, biking families, mums and babies in strollers. Hard to pass so I settle in to the slower flow. Unbelievable amount of construction with high rise condos going up everywhere.

It’s hard to spot Cinesphere, where I’ve seen so many great films. I hope it survives COVID as well as my fav landmark, the windmill demo project. Only a mild headwind today so it isn’t turning.

The crowds thin out slightly. I have to stop for a flock of Canada geese crossing the trail and spot an encampment only 10 feet away from the thunderous traffic on Lakeshore. The Sunnyside Bathing Station is surprisingly open despite COVID.

At long last the “millennial” white pedestrian bridge over the Humber is in sight signaling the turn north onto the Humber River trail. Close by the bridge are the twin Palace Pier towers.

In 1981, Patrick Kelly, an undercover RCMP officer, tossed his wife off  the 17th floor balcony of the building.  He was convicted of first degree murder in 1984. His trial revealed that he’d turned to the dark side, working with organized crime to fund his extravagant lifestyle as well as his extra-marital love affairs.

He made parole in 2010 only to have it revoked in 2012 because of his relationships with women and insisting on cash payments for his antiques “business” in Prince George. By 2016, he was out again, living on Vancouver Island. Caveat emptor – indeed caveat everybody.

The trail along the western edge of the Humber River is lightly travelled today. I’ve had it easy so far since the roads have sloped down to the lake. Now I’ve got a few heart thumper hills until I emerge at Old Mill and Etienne Brule park to tackle the toughest climb yet.

Even at my fittest, I’ve never made it all the way up Humberview, a killer hill complete with hairpin bend, impatient drivers, etc.  I walk up my usual bit then dive into the shady alleys of Baby Point.

A friend lives nearby. I’d always pronounced it “baybee” but in fact, it’s “Babbee”, the name of  French fur trader, Jacques Bâby. Not a very nice guy though.

Recently the plaque below appeared near the stone gates of the enclave. It was created and funded by a white person with a social conscience. Not a comfortable truth to learn that Canadians also enslaved Black and indigenous people.

From here it’s a long hot ride along Annette and Dupont over to Summerhill. I stop along the way at one of my fav Starbucks at Christie for a cold drink. It’s housed in a former bank, but of course, the usually crowded cafe is much diminished because of COVID. There’s no place to sit down outside so I take a walk break and enjoy the street art along the way.

For many years, this Summerhill landmark, the former North Toronto station stood neglected. Built to rival the downtown Union Station – the tower is copied from the Venetian bell tower in St. Mark’s Square – it fell into disuse by WW2 though it continued to function as a liquor store. It’s now one of LCBO’s flagships. Read its full history here.

Finally I’m on the home stretch. A shady cool ride through Rosedale, Moore Park and Mt. Pleasant cemetery.  I do a short loop past The Boys and reach home for 50km!