The 2021 Ride to Conquer Cancer is – sigh – virtual once again on August 28-29th. But cancer doesn’t sleep so I’m embarking on  my 14th Ride to raise money for research at Princess Margaret Hospital, one of the top 5 cancer hospitals in the world!

Once again I’m overwhelmed by the generosity of my supporters.  As pledged, I’ll be doing four 50 km rides, the 200 km distance from Toronto to Niagara Falls. This year, I’m riding for three friends who are blood cancer survivors: L, M and T, this ride is for you!

The weather couldn’t have been more perfect; a clear sky with a soft breeze to ward off the heat of the sun.

I headed down into Sunnybrook park via the steep hill at Lyndhurst, passing the  dog park (no customers yet) and gliding past the picture-perfect creek and  Sunnybrook stables which, judging by the COVID warnings on their website,  appear to be back in operation.

On May 21, 2018, 3 am, a two-alarm fire broke out, destroying one barn and damaging the other. Firefighters spent long hours battling the blaze, but tragically only could save 13 horses, fewer than half on site.  The Fire Marshall’s Office says that since the damage was so extensive, the cause of the fire may never be found.

My ride through the park felt blissfully cool.  At The Teeth, I turned left, passing my favorite icon, Tout Est Possible and headed up Taylor Creek trail.

The hill  out of Taylor Creek to Victoria Park remains a challenge.  I might have made it all the way up in “granny gear” (hey, I am a grandmother), but I opted for the better form of valor and walked up at the halfway mark.  I zoomed down Victoria Park to Gerrard then followed Scarborough Road all the way down to the lake, passing two favorite icons: Hydro Cat and the student posters at Adam Beck Public School.

Scarborough Road ends in a nail-biter of a hill down to Queen Street West. Good thing my old Trek bike has disc brakes!

The lake was especially lovely this early Monday morning. I rode a short distance along the boardwalk before catching the designated bike trail.  Last week, my friend, TO Poet and I strolled the length of the boardwalk and discovered a neat art installation: a row of painted stones lining the sand for hundreds meters. For the great pics, check out TO Poet’s blog here.

I said hello to the resident flock of Canada geese breakfasting on the lawn (no, that is NOT cores of aerated lawn!) and leave the Beaches, swinging by the skate board park and fresh street art before turning south at the big Canadian Tire store. 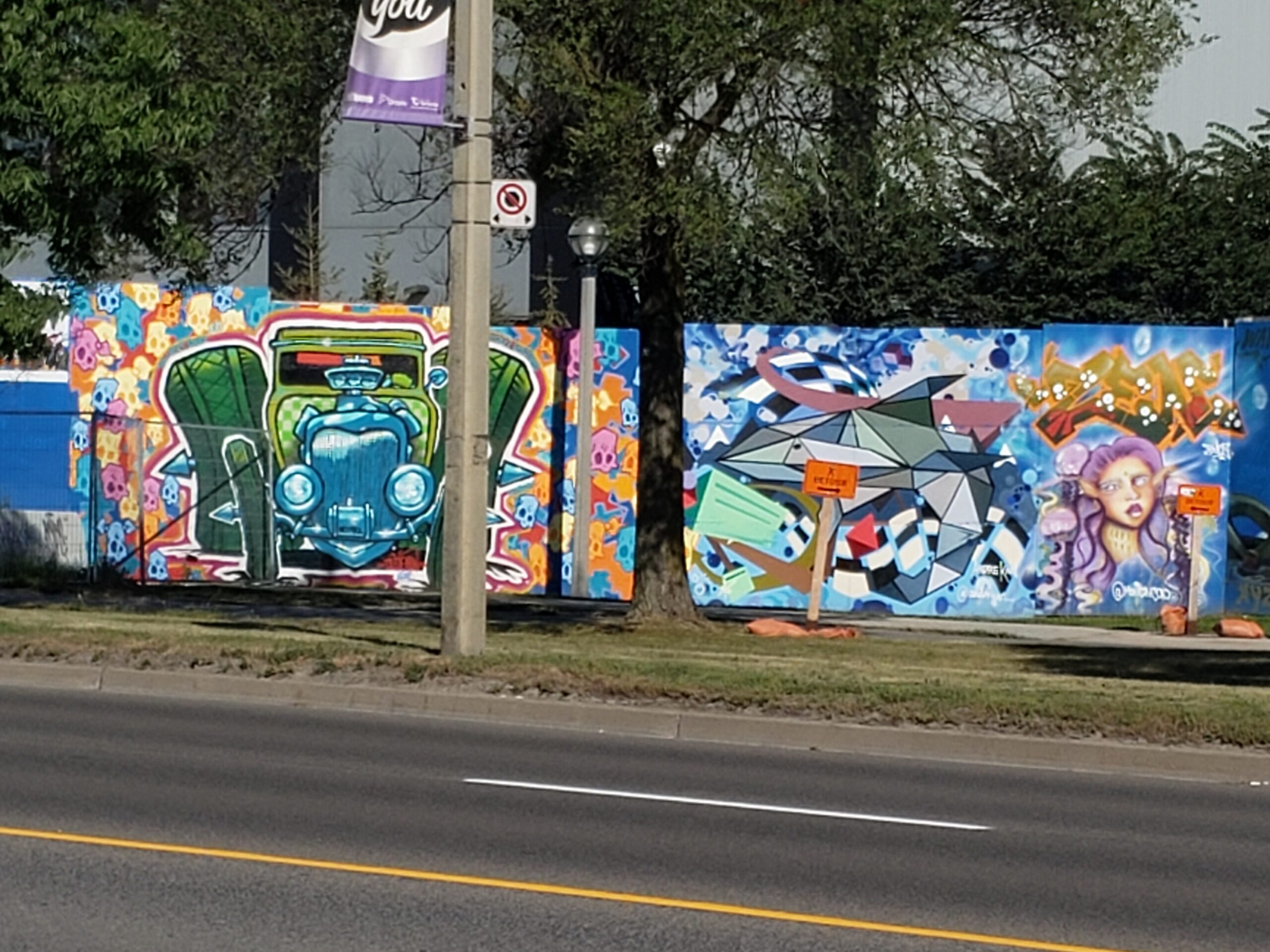 The city has made huge improvements to the bike path that leads to the Leslie Street spit (aka Tommy Thompson Park).  So who was Tommy Thompson? According to Wikipedia his father was the head gardener at Casa Loma – better known as Henry Pelham’s folly – and Tommy was actually born on its grounds.  A botanist, horticulturist and RCAF veteran, he became Toronto’s first Parks Commissioner. His most notable and somewhat controversial achievement was transforming Toronto Island into a public park. That meant flattening a lot of houses and kicking out the people who lived there. To this day, a conflict waxes and wanes between the city government and the remaining residents on Ward’s Island.

The new improved trail passes by some allotment gardens where urbanites can grow fruit and vegetables. The wild flowers are out, even chicory, a sky-blue flower that only opens in the shade. The peaceful trail ends abruptly at Cherry Street and dumps you out into a condo building apocalypse.

The massive building and excavations mean that the bike trail is now crisscrossed by entrances for trucks and equipment. Chanting the cyclist’s mantra, Stay Alert, Stay Alive, I crossed over the ancient Cherry Street lift bridge. A sign warned me to walk my bikes. Good thing, too, because a huge chunk of the pedestrian walkway is missing and only covered by plywood boards!

In 2019 the lift bridge got stuck open for four weeks. Here’s the video. I paused for a moment to take in the view of Keating Channel.

The trail along Queen’s Quay is pretty chopped up, too, with several detours around more condo construction and the never ending Gardiner repair. I jockeyed with other cyclists and dodged texting pedestrians as well as a new stealth hazard: the ubiquitous electric scooter. These PEVs (personal electric vehicles) are all the rage now. Owners stage weekly rallies at Queen’s Park. There’s even an electric unicycle! Here’s the scoop.

The bureaucracy is stymied about how regulate these PEV’s. For now they rocket down the city bike lanes at speeds of 30 kilometres  – in total silence.

At the CNE’s Princes Gate, I turned north on Straughn and after braving some heavy Toronto traffic,  entered the shelter of Trinity Bellwoods Park.

On the way, I had my first view of pickle ball which has taken the world of seniors by storm. To me it looked like ping pong played on a tennis court with a wiffle ball. A good friend has joined the cult – argh!

North to Harbord where I spotted some terrific street art.

I pedalled north up St. George through U of T campus then up to Dupont, east along Marlborough and its hidden quaint houses before hitting Yonge Street. I saluted the happily restored Summerhill Station then cut through Pricefield Park to dive into Rosedale and the hush of money.

I was sad to see that the home of my old boss at the mining company has been sold and is now being gutted. Sic transit gloria mundi.  I took my usual route north via Glen Road and the Summerhill pedestrian overpass. Glad to see that the street art painting of the 1950s car was still visible on the concrete wall bracing Whitney Public School.

From here it was a quick ride through Moore Park, a short loop in Mt. Pleasant cemetery and home. First 50 km done!