Your first love  has always been poetry. How did you start writing?

I can’t remember a time when I wasn’t interested in poems and storytelling. What attracted me were the things read to me by my mother, father and grandmother, especially at bedtime. What I consider to be my first publication was a poem published in the school paper when I was 18. I remember being rejected by Hallmark Cards when I was little. I had sent them a verse and they sent me back a card that said, “Better Luck Next Time.”

I picked poetry then for the same reason I write it now. It’s fast, it’s beautiful and it tells the truth.

Your readers may be surprised to learn that you worked many years as a romance writer and editor. Do tell us about it!

I was looking for a job and I dropped by Harlequin unannounced. Someone at my library job had told me that Harlequin was hiring. Well, to my great good luck, they were. The person who was supposed to be there for the job interview didn’t show up so they hired me instead—on the spot. That’s how I became a Harlequin editor. Later on, I became a writer there as well.

I was attracted to the romance genre because I thought, and still think, that romance is one of the greatest experiences a human can have. I haven’t had a romance published in a long time, but you can probably get one of my old ones for ten cents somewhere on the internet!

Why did you turn to crime fiction?

Like so many of my students, what attracted me to crime writing was a pair of detectives that I loved without reservation: Nancy Drew and Sherlock Holmes. What attracted me then, I think, was the power of logic. What attracts me now, after reading hundreds upon hundreds of mysteries and after having published my own novels as well as working as a criminologist for many years, is the insight such works give the reader into the reality of being a human being: a normal one, a criminal one and one in whom both worlds meet. Which is to say—almost everyone.

Yes, “The Midnight Boat to Palermo” is a story of desperation, murder, cleverness and regret. I can’t remember exactly where I got the idea for it, but it probably was after reading a true-fact account of the Sicilian trade in opium. It also makes use of my grandmother’s recipe for spaghetti sauce!

Your popular Ellis Portal novels have won and been short-listed for many awards, including the Arthur Ellis Award. How did you come to write this enduring series?

That would take a book in itself to explain. . One day a character came to me and said, “I am Ellis Portal. Write about me.” (BTW Ellis Portal’s name was inspired by the sign on a tunnel in the TTC subway system. We challenge readers to find it. – MH Callway)

Your recent book, Don’t Forget You Love Me, is the sixth in the Ellis Portal series. Will there be a seventh book? 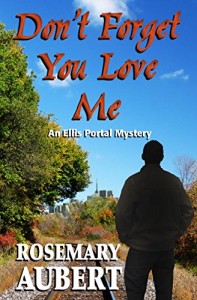 Ellis has recently told me that our work together is done.

Your novella, Terminal Grill, took a dark turn. Why noir?

What led me to write Terminal Grill was the setting, not only in the physical bar, which is a real place, but in the underworld of poetry in Toronto. Though I don’t think that world is as hidden now as it once was. And I wanted to write another romance, even if it was a dark and frightening one.

Of all my work, it seems to me that Terminal Grill has had the most overwhelmingly positive response from my readers.

I love my readers. I love their comments, which have always been positive. I love it when a complete stranger tells me that they read and liked my books.

The strangest feedback I ever got was from a man who told me he’d found all sorts of factual errors in one of my books. He said that nevertheless, he liked it and had read it superfast. When I looked up the errors, there were none. He’d read the book so fast he got it all wrong!

Tell us what’s next for Rosemary Aubert.

I’m hoping to launch my new book, The Midnight Boat to Palermo and Other Stories in the fall. You can learn about this and other appearances I’ll be making on my website: www. rosemaryaubert.com.