Welcome, Kristina. How did you become a writer?

Before writing my series, I was the director of security, human resources and guest services at a resort in the depths of the British Columbian mountains. The job and lifestyle captured my heart, and I decided to write mysteries about life in an isolated resort. While writing the first four novels, I spent five years living aboard a sailboat in the US and the Bahamas.

Crime Writers of Canada nominated my novel, DESCENT, for the Unhanged Arthur award and The Crime Writers’ Association nominated BLAZE for the Debut Dagger.  My short stories have been published in Ellery Queen Mystery Magazine and The Voices From the Valleys anthology. 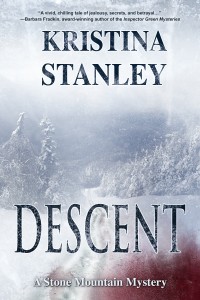 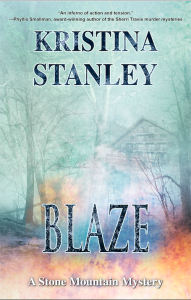 You blog three times a week and you’ve gained an incredible following. Tell us how you started.

I started my blog in April 2011 at the suggestion of a friend. Since then, it’s come a long way. In the early days, I was informal about what I posted. Now, I’m a little more structured. Mystery Mondays is published every Monday where I host another author. In return for publicizing their book, I ask for a writing or publishing tip for my readers.

Wednesdays, I try to post Write Better Fiction. Here I focus on writing tips. On Fridays, my series is called Farley’s Friday. This is the story of my wheaten terrier told from his point of view. On the other days, I usually post about my writing journey and anything related to publishing.

Currently just under 5000 people are following my blog, and I hope this continues to grow. The top five locations of my followers are USA, Canada, United Kingdom, Australia and Germany.

What do you especially love about blogging?

My passion for writing led me to start a blog. I wanted to connect with writers and share the journey with others. The joy of it all is I discovered I truly enjoy online networking. I love to learn from others, I’ve discovered many books to read that I otherwise wouldn’t have known about, and I do believe the blog helps sell books.

Farley’s Friday is the blog I have most fun writing. Mostly because it’s pure imagination, and it’s interesting to look at life from a dog’s point of view. My personal favourite this year was Farley’s Friday: Top 5 Reasons Dogs Should Be Welcome At Work. (Click the link to read it!)

My most popular blog though was September 18th, 2012. How To Proofread had 812 hits in one day. I received so many comments that I created a permanent page on my website for readers!

Tell us about your most recent book.

I write murder mysteries with a little romance. I love to explore what would make a sane, typically non-violent person commit murder. I also like to write about remote locations.

BLAZE , my most recent book, was published by Imajin Books in October 2015. It’s the second in the Stone Mountain Mysteries. Instead of exchanging vows, my protagonist, Kalin Thompson, spends her wedding day running from a forest fire near Stone Mountain Resort, and the pregnant friend trapped with her has just gone into labor. Meanwhile, Kalin’s fiancé, Ben Timlin, hangs from the rafters of a burning building, fighting for his life. Can the situation get any hotter?

My favorite review was posted on Writers Who Kill. by E.B Davis who wrote:

What I found, after being hooked by the first sentence, was a primer on how to write a novel. I turned the page to the second chapter and realized Kristina had hooked me right from the start…For all readers, the mystery is satisfying, but for readers who are also writers—this is also a textbook to learn about pacing, character development, and plotting. It’s no wonder that Kristina is a bestselling author.

What is next for your readers?

This spring  Imajin Books is releasing two of my books. The first is AVALANCHE, the third novel in the Stone Mountain Mystery Series. Here’s what happens to our hero, Kalin Thompson:

On a cold winter morning, deep in the Purcell Mountains, the safe at Stone Mountain Resort is robbed hours before Kalin’s brother, Roy, disappears in an avalanche.

Under normal circumstances, as the director of security, Kalin would lead the investigation into the theft, but Roy is the prime suspect. The police and the president of the resort tell her to stay clear of the investigation, but she risks her job to clear Roy’s name.

Is her faith in her brother justified? Was the avalanche an accident or did something more sinister happen? Threats against Kalin escalate as she gets closer to the truth. And is the truth worth destroying her life for?

I’m also releasing a guide for authors. The success I had in selling and distributing DESCENT and BLAZE  came came from implementing what I learned by trial-and-error, by talking with other authors and store owners about the process, and from guidance from my publisher. I’ve taken everything I’ve learned and put it into a book.

In THE AUTHOR’S GUIDE TO SELLING BOOKS TO NON-BOOKSTORES I explain how an author should plan, prepare and execute getting books into stores and actually making money from it. It doesn’t matter whether you’re an Indie author or traditionally published, all that matters is you have a printed edition of your fiction or nonfiction book and you want to get that book out into the world.

Thanks, Kristina. Can’t wait to read your two new books.  And fingers crossed for good news at the Arthur Ellis shortlist event coming up next month!