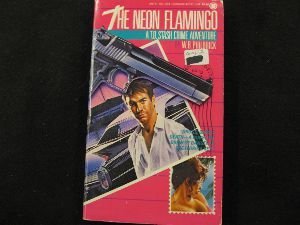 I read my first T.D. Stash novel  while vacationing with the family at a tourist lodge on Lake Temagami. Despite being exhausted after canoeing with a 3 year old, I sat up all night to finish The Neon Flamingo. Its Florida Keys setting was as removed from Northern Ontario as you can imagine.

Gripping and smoothly written, W.R. Philbrick’s book has stayed with me, mostly because its hero, T.D. Stash, was so unusual for the late 1980s. He was a screw-up – a  stoner and sometime fisherman desperate enough for cash to do favors for friends – legal or not so much. He often made dire situations worse.

I quickly read the next two books in the series, The Crystal Blue Persuasion and Tough Enough. Then waited in vain for more.

A few years later I met W. R. Philbrick at a crime writers’ conference. He happily signed my copy of The Neon Flamingo then passed on the bad news that his editor didn’t want any  more T.D. Stash novels. A damn shame!

I suspect that TD Stash series was too dark. In other words, too intense, truthful and violent for 1990s readers. Like Liza Cody’s Bucket Nut, the books were fine examples of noir – and thus decades ahead of their time.

So what happened to W. R. Philbrick? I’m happy to tell you that he’s written over 30  novels under three pseudonyms, including the Connie Kale and J. D. Hawkins crime series.  He’s had great success as a YA author, winning multiple awards.  His YA adventure story, Freak the Mighty,  was translated into several languages and is studied in classrooms throughout the world. Later it became a successful film.

The T.D. Stash books are not  available on Amazon in print or digital form. Abe Books carry only a very few used paperbacks listed between $3 to $8US.