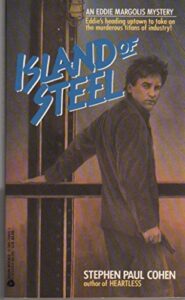 Back to clearing my book shelves, Readers!

Next up: two books by Stephen Paul Cohen, featuring investigator Eddie Margolis: Heartless (1986)  and Island of Steel (1988). Both published by William Morrow.

Flipping through Cohen’s books 30 years later,  I realize that he’s writing noir – and nice juicy pulp fiction, too. The gritty street life he creates feels very real.  Just the same, he relies on many PI thriller tropes, which readers expected and wanted: Eddie Margolis, the hero, is a a desperate alcoholic who decides to avenge his best friend’s murder. He deals with corrupt rich and powerful men and beds deceitful dames. He’s betrayed by a lover. You know how it goes.

But that doesn’t mean the books are bad. Far from it. Genre publishers look for “the same but different”. By that criterion, Cohen’s books certainly deliver.

So what happened to Stephen Paul Cohen? There’s very little about him on the internet.  His books are available on Amazon.ca, but only as used copies.

One source of information is Allen J. Hubin’s review of Island of Steel on the Mystery File website.  Comments suggest that publishers may have dropped hard-boiled fiction in the early 1990s, because cozies sold better.  A fair observation, but I also believe that Cohen’s writing was ahead of its time. He was writing noir, which wasn’t popular then, but has since had a big resurgence .

I further suspect that unfavorable reviews may have played a part. In 1989, the year after Island of Steel came out, Cohen co-authored a speculative fiction thriller, Night Launch, with then Senator Jake Garn. The book should have been a slam dunk for both authors, but  Publishers Weekly gave it a thumbs down.  Did William Morrow drop Cohen because of that?

Ten years later, Cohen apparently tried writing again. His drug trade thriller, Jungle White, was published in Thailand by White Lotus Press, but not elsewhere. (Did Cohen move to Asia, the way a few of my friends have done?) A reviewer on the Things Asian website hated Jungle White so much he wrote a lengthy and damning review, renaming the book, “A White in the Jungle”.  I haven’t read it so I can’t comment either way.

All writers get the rare bad review. Most of the time the reader simply didn’t “get” the book. But when they feel compelled to vent to the whole world about it, I suspect a more self-centred motive is at play.  I have to ask the question: Did the Things Asian review make Cohen quit writing for good?

BOTTOM LINE:   My copies of Heartless and Islands of Steel are used Avon paperbacks, not first editions.  Prices on Abe Books, Amazon and Biblio range from $4 to $12.  Thierry value: $18.97US*