It’s been a cold spring in Ontario, but time to open up the cottage for the season.  This means gearing up to battle the field mice invasion and/or emptying our bank accounts to repair winter damage.

At first, Anno Horribilis aka 2020 seemed to have thrown us a break. A mature pine tree had cracked in half over the winter but the tree top landed clear of our roof.  No structural damage – whew!

As for the mice, well, remember Walter White’s respirator in Breaking Bad? 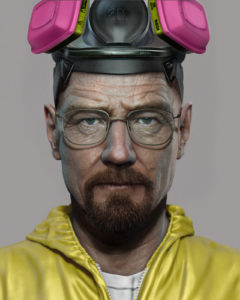 Good thing we had one, because an ocean of rodent poop was waiting for us in the cupboard under the sink. More feces sprinkled over the counters, stove, you name it.  And a favorite quilt chewed to pieces. Sigh.

It’s necessary to take extreme precautions when cleaning up because Huron County deer mice  harbour the hantavirus. (Nasty info via the Ontario Government publication here.) But my love for animals was about to be further tested…

Outside in my late mother-in-law’s garden, we spotted a pretty bird about the size of a chicken. Not wanting to scare it away, I sneaked closer with my camera.

The bird wasn’t afraid. In fact, it exhibited so little fear that we worried it was someone’s pet. Not a safe environment around our cottage for bunnies and birds – lots of hawks and the occasional carnivore…

While taking the protective plastic off our young fruit trees later on, I noticed the bird again. Quite unafraid, still following us. Worried now, I wondered, should we feed it? Ask our neighbours who it belonged to?

Turning my back to it, all of a sudden, WHACK! Something hard struck me between the shoulder blades. It was the damn bird! Too cowardly to attack fact to face apparently.

OK, I thought, obviously a territorial dispute happening here. For some unknown reason, the grouse had settled on our cottage property for mating and breeding purpose.

Now the grouse was much smaller than me, so its attack was merely disconcerting. Still as a long-term animal rights supporter, I couldn’t help feeling a tiny bit betrayed.

More was to come though. Grouse-zilla kept a beady eye on us as we cleared the yard every so often gathering itself for a rush. By now I was visualizing predators at the top end of the food chain. Where was a fox, muskrat or hawk when you needed one?

“Let’s take a walk to the beaver pond,” Ed suggested. “We’ll lose it in the woods.”

The beaver pond lies about half a kilometre east of our cottage.  You reach it via a trail through the woods.  As we made our way along the trail, we heard it rustling through the undergrowth beside us – all the way to the pond.

So round the pond we went – a fair distance over  ditches, narrow foot bridges, looping round on trails that aren’t easy to find. Did it follow? Of course it did.

It followed us all the way back to the cabin, a distance of at least one kilometre through dense trees and brush. In a (very) grudging way, I admired it. The little f**ker had grit.

After a quick search on the internet, I turned up other tales of grouse attacks. Here’s one of the funniest, Yellowstone Grouse Attack! on video.

We drove off but sadly it wasn’t under our tires. I hear grouse roasts up nice….