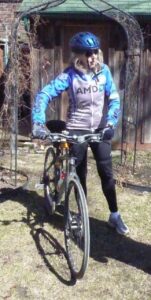 Every year since The Ride to Conquer Cancer began in 2008, I’ve ridden the 200+km to Niagara Falls to raise funds for cancer research at Princess Margaret Hospital.  Anno Horribilis, otherwise known as 2020, nearly put at stop to it.  But cancer never sleeps – and neither did the organizers of the Ride.

On August 29th, I’ll be doing the virtual Ride – wearing my 2020 jersey picked up in observance of all COVID protocols.

As a big thank you to my wonderfully generous donors, many of whom continue to support me year after year, I pledged to do four Rides of 50km each – the 200km distance from Toronto to Niagara Falls.

I headed out along the Beltline Trail to Allen Road, which this early fortunately stayed safe with only the odd dog walker or runner.

The bike trail now ends short of Eglinton, so I took side streets over to Strathearn and coasted down into Cedarvale park. The trail runs past the dog park (deserted) and plunges into the ravine.

I have fond memories of chatting with an elderly dogwalker, the self-appointed Keeper of Cedarvale, who shared my love of street art and showed me the children’s mural.

Read more about my encounter here.

It’s a nasty, steep, cardiac-arresting climb out of Cedarvale to emerge at the TTC stop St. Clair West. Down to Spadina and past Casa Loma, Henry Pellatt’s grand folly complete with full body shower and secret passages!

Built more than 100 years ago,  the castle is a maintenance  nightmare. Henry Pellatt went bankrupt, abandoned it and ended up rooming with his butler. In 1924, the City of Toronto seized it for unpaid taxes – and ever since has tried to offload its costly upkeep onto the private sector.  This back-and-forth game continues to this day. As does the castle’s cycles through ruin and renovation.

A few years ago, the City was forced to take charge of this famous tourist attraction and film location (X-men,  Chicago, Titans, etc.). The bureaucrats were so desperate, they even allowed the Crime Writers of Canada to meet there. A glorious and transient privilege.

West along Davenport then south along Christie toward Lake Ontario. To my surprise I ended up at a Millennium-bridge type pedestrian bridge called Garrison Crossing: in fact twin Millennium bridges. Underneath the Gardner, I discovered beautifully paved bike lanes  and an full community entertainment space next to Fort York, The Bentway , all deserted because of COVID. 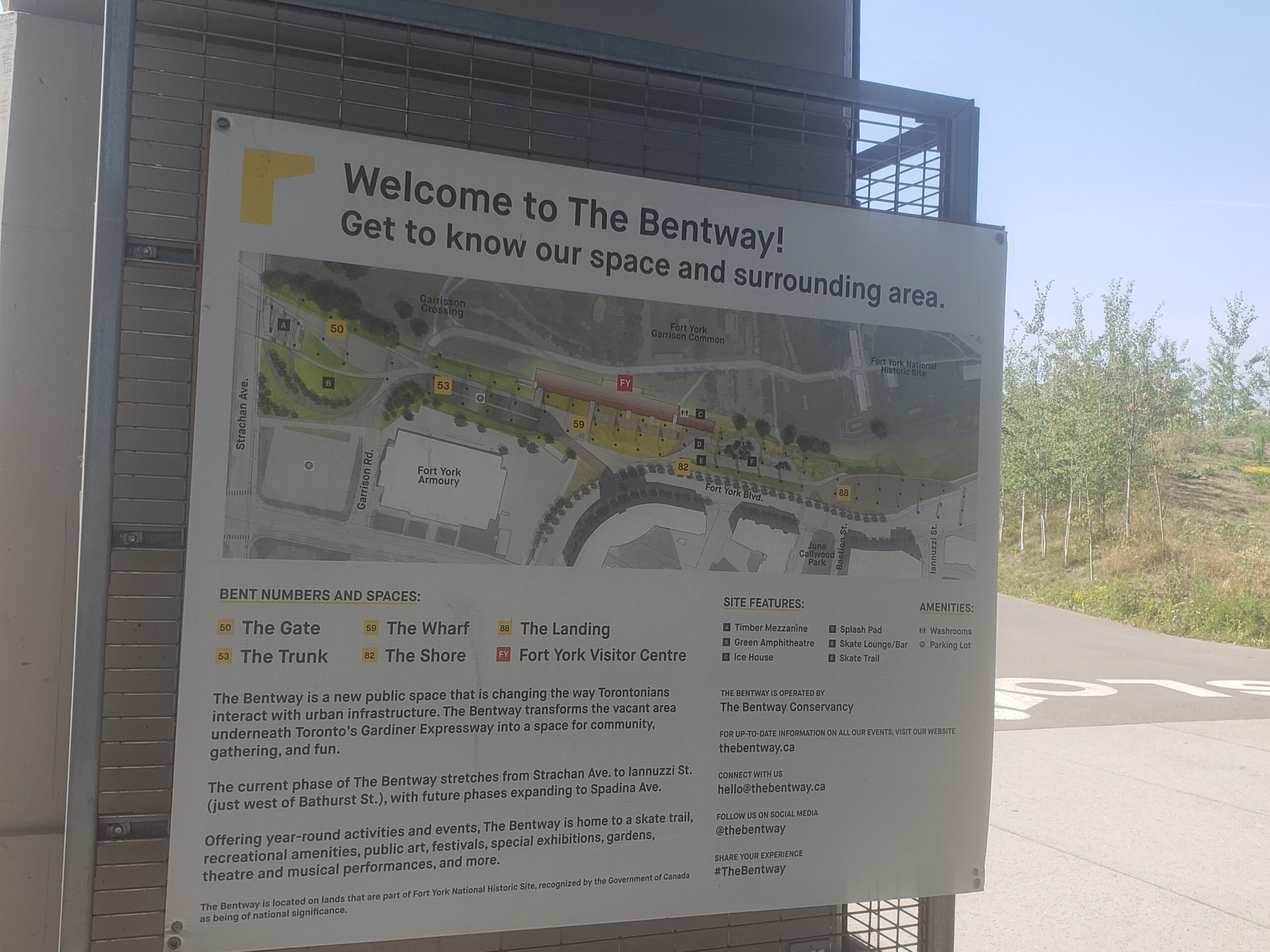 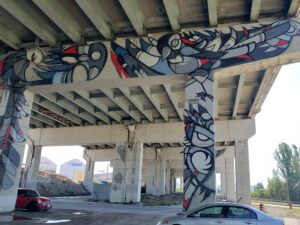 Along the newly refurbished bike lanes by the shores of Lake Ontario, Queen’s Quay to Cherry Street and the Distillery District. I stopped at Balzac’s, my favorite cafe, for a coffee and muffin, enjoyed despite necessary physical distancing in the shade of my non-favorite work of corporate art. Some days I wish it suffered the same fate as the corporate art in Fight Club!

Coffee over, I head back up the Don Valley bike trail, a much-travelled training route. Lots to admire along the way from the indigenous street art under the Gardiner to sanctioned murals and graffiti.

There’s even a gargoyle sculpture garden! 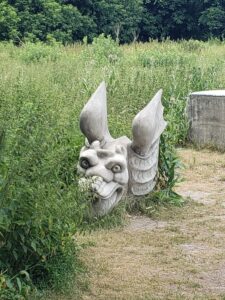 I branch off from the Upper Don Valley trail  and head through Sunnybrook Park, Leaside for a lap round Mt. Pleasant cemetery to make up the distance.  The first 50 km are done! 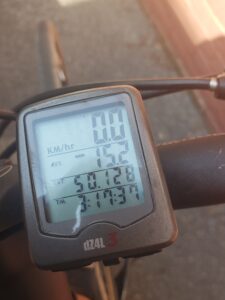