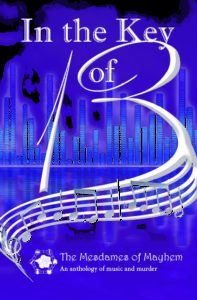 The Mesdames of Mayhem are delighted to announce their fourth anthology, In the Key of 13, a malicious medley of music, mischief and …murder!

This year’s book contains tales and a satirical poem by 19 Canadian crime writers, award-winning established authors and talented new-comers.  Each story has a backdrop of music: Beethoven, Mozart, war songs, folk tunes and even Elvis. And they range from comedy to thriller to noir.

My own story, “Brainworm”, relates how a worn-out caregiver is slowly and relentlessly driven mad by her conniving family – and a French chanson that lodges in her mind and refuses to depart. It’s a dark one again, readers: couldn’t help it.

It was Chérie’s favorite ditty. She made all her students sing it in French class. Fiona, who had no ear for languages, had provoked both Chérie’s and her classmates’ laughter by mouthing: “Sur le pont d’Artagnan, lorry doh-sa, lorry doh-sa.”

Chérie had entered her and Dad’s lives a short year after Mother died. All Fiona’s friends raved about their new French teacher who’d left the lights of Paris to teach in boring old Hamilton. Imagine!

Chérie had thick black hair, smoothed into a chignon. Her egg-yellow cardigan, red shoes and clanking costume jewelry added le punch to her wardrobe as she put it to the class. Nothing though struck Fiona as more profoundly stupid than the name Chérie called herself: Madelle. A witty contraction of Madame and Mademoiselle, the French version of “Ms”, très chic, non?

Chérie liked to single Fiona out in class, asking her questions about tricky French spellings with a twist to her cherry red lips. She lingered beside Fiona’s desk, scanning her work before departing with a small tap-tap of her fingers on Fiona’s notebook. That Dad would consider dating her, let alone marry her, was beyond unthinkable.

But time erodes everything. Dad and Chérie’s 30 year marriage, with its ups and downs, foreign travels and family festivities had faded into memory. Their only son, Bertie was now 29 years old, a sought-after data base analyst. And Chérie was no longer glamorous, dwindling into a frail shadow of her younger self.

Fiona forced her eyes back onto the road. The weather had deteriorated. Clouds of blowing snow wrapped everything in a haze; oncoming headlights loomed toward her like the dull, yellow eyes of beasts. She slowed to a crawl, terrified she might need to swerve or brake.

The Royal Botanical Gardens were barely recognizable under the heavy shroud of snow. She inched past them.

It’s like the ice age has come again, she thought. Grinding human civilization, our history, our lives into nothing.

Available on Amazon.ca AND through Sleuth of Baker Street and selected bookstores.