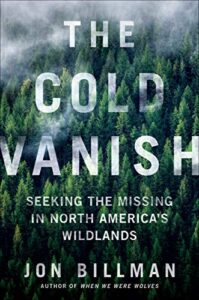 I was a bookish child and so inept at sports that my friends would fight to NOT have me on their team. But two amazing women got me to love sports – and changed my life forever.

In university, my sister-in-law got me into hiking, biking and downhill skiing. (We also had adventures dinghy sailing.) And my friend, Marian Misters, co-owner of Sleuth of Baker Street bookstore, introduced me to road running.

Hard work and perseverance accomplished more than I dreamed of: I’ve run a marathon, regularly biked 120 km at a stretch and skied black diamonds without dying! But I remain in awe of ultramarathoners, adventurers and mountain climbers whose exploits I devoured in the late, great Outside magazine.

Jon Billman, is a search-and-rescue expert, a former wildland firefighter and regular contributor to Outside. In The Cold Vanish, he explores how and why people continue to go missing in the wilderness. It’s been said that the solution to an enduring mystery is often sadly banal. That may be true of the many cases Billman writes about, but like Jon Krakauer, he unveils the tragedy behind each story – and a warning.   Venturing into the wilderness requires an abundance of caution.

Billman’s book reads like a thriller. I couldn’t put it down. The overarching  story centers on Jacob Gray, a 22 year-old cyclist who disappeared in Olympic National Park in Washington State.  He’d embarked on a cycling journey but shortly after leaving home, his bicycle was found abandoned by the side of the road, all his gear intact.  Close by was the fast-flowing Sol Duc River. Searchers assumed the worst: that he’d tried to fill his water bottle, fallen in and drowned.

Billman formed a close friendship with Jacob’s father, Randy, who never gave up hope of finding his son. They searched for Jacob for over a year, chasing scenarios from Jacob being involved in the drug trade to joining a cult to simply walking away from the world.  (No spoilers, you must read through to the end of the book to find out what really happened to Jacob.)

The reasons behind these disappearances range from murder to accidents to running away. Billman interviews scientists – there aren’t many of them – who  research how and why people go missing in the wilderness.

So how do people go missing? Much of the time accidents are to blame, usually falls when the person was on their own.  The other main reason? Simply getting lost and dying from exposure, which usually means dehydration or hypothermia. People greatly underestimate the amount of water they need when hiking, especially in the heat. And even temperatures as moderate as 0 degrees Celsius (32 degrees Fahrenheit) can lead to hypothermia.

Sadly the vast majority of the cases do not end well. Billman does include a miraculous rescue, that of a young yoga teacher who went missing in Hawaii for over two weeks. She wandered off the marked trail in a nature preserve and got lost. She survived a fall and a broken leg, but knew enough about nature to stay dehydrated.  Search planes found her by chance in an area of the preserve far outside the search range. She’d wandered much farther than anyone had predicted.

The takeaways from the stories: those who go missing for a long time are found by chance and by people unassociated with the original search and rescue team.  Often as not, the missing  person is in a location logic did not dictate.

Important to remember that our predominantly urban society is spectacularly underequipped to deal with the wilderness. It’s not Disneyland. When exploring the wilderness, listen to the advice of forest rangers and park wardens. Don’t wander off marked trails.  Take the right amount of water, food and supplies with you. And never go alone.

My rating: 5 stars  Eat this book!

A Footnote:  In 2016, at Left Coast Crime in Phoenix, Arizona, I took a tour of the Apacheland Movie Set museum. Our guide told us how a hiker had died the day before of heat and dehydration. He’d wandered off the beaten track and gotten lost, one canyon looking much like another. Also that day, three German tourists had set off into the desert with umbrellas to ward off the sun, but greatly underestimated the quantity of water they needed. Fortunately they were rescued, dehydrated but alive.  Read the full story here.