Exciting news: it’s already June and in  a little more than two weeks time, the  publication of Moonlight and Misadventure on June 18th.

I’m delighted to welcome fellow author, Clark Boyd to Cyber Cafe. Clark  lives and works in the Netherlands. His fiction and essays have appeared in High Shelf Press, Havok, Scare Street, Fatal Flaw Magazine, and various DBND Publishing horror anthologies. He is currently at work on a book about windmills. Or cheese. Maybe both!

Clark’s wickedly twisted sense of humor makes his story “Battle of the Jerrell Twins” such a great read.

Tell us about the Jerrell Twins. No spoilers!

When I was younger, I owned a 1967 Ford Mustang, fire-engine red just like the one in my story. The truth is that it once belonged to my grandmother, who only drove it back and forth to work. My abiding memory of that car is that it reeked of her cigarettes no matter what I did to get rid of the smell. Also, in an earlier draft of the story, I referenced a little horse-shaped hood ornament that I could have sworn sat on the hood of that car — in the center, right at the front. (Gleaming in the moonlight, of course!) But I had to take that detail out because, as my father insisted, 1967 Mustangs didn’t come with hood ornaments. Dads can be such buzzkills.

What gave you the idea for the crazy idiot Jerrells?

In high school, I knew a kid whose dad was a dentist.  On a regular basis he kept a canister of nitrous oxide in his car, and bragged about how he lifted it from his father’s office. I remember watching in awe as he and his buddies took hits off that bottle before school. I’d never heard anyone laugh with such delicious fun and reckless abandon before. Or since, for that matter. At some point, I think the kid wrapped his car around a tree or drove it into a K-Mart or something. I always dreamed of finding some way to weave this madness into a story. “Misadventure” seemed to fit.

What do you especially enjoy about being part of Moonlight and Misadventure?

I love the conceit of it more than anything. I had been working on this story for a few months, and it had gone through a lot of tweaks as I sent it off to different places. But when I saw what Judy was looking for in Moonlight and Misadventure, the whole thing coalesced and gave me the frame I needed to tell the story right.

Tell us more about your writing. Do you prefer writing short fiction or novels or both?

I spent twenty years reporting, writing, and editing radio scripts for an international news program called The World, which still airs daily on the US public radio network. When I left that life behind and moved with my family to the Netherlands, I figured it was time to try something new. I’ve been dabbling in short fiction and essays ever since, with an eye toward eventually trying a novel. Maybe it’s no surprise, given the fact that I wrote so long for the ear and not the eye, that I enjoy crafting dialogue more than just about anything else.

What genres appeal to you?

“The Ballad of the Jerrell Twins” is my first crime fiction story. Most of what I’ve written best fits into the horror category, although I tend away from gore and lean toward stories with a psychological twist. No matter what I write, I try to infuse it with humor and not take it too seriously.  Perhaps that’s why I don’t have much luck getting any “literary fiction” published.

How did you become a writer? Did you know from childhood or did you decide later in life?

I knew from a very young age that I wanted to write. One of my earliest elementary school memories is winning a prize for some (extremely) short story I wrote in second grade. Later in life, one of the main reasons I became a radio journalist was because I could get paid (poorly) to write on a daily basis. That said, I can’t say that trying to switch gears and write fiction at the age of 50 is the best career move I’ve ever made…

Well, we disagree! Learn more about Clark and his writing here

Website:  Slaughterhouse SketchesJourneys into the Dutch Heart and Soul (wpcomstaging.com) 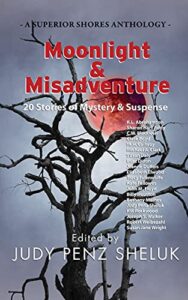 Whether it’s vintage Hollywood, the Florida everglades, the Atlantic City boardwalk, or a farmhouse in Western Canada, the twenty authors represented in this collection of mystery and suspense interpret the overarching theme of “moonlight and misadventure” in their own inimitable style where only one thing is assured: Waxing, waning, gibbous, or full, the moon is always there, illuminating things better left in the dark.

Release date: June 18, 2021 in all e-book formats and trade paperback on Amazon and all the usual suspects.