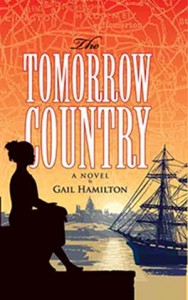 Madeleine has asked me to chat about my blog so here goes.

I started the blog back in 2010 but didn’t take it seriously until a couple of years ago when told all authors need blogs for promotion and I better get busy. I did try but seem constitutionally averse to flogging my work. First it was difficult to think of something new. Second, a blog about writing ends up aimed at writers who already know everything I could talk about and don’t need more about conversations with the cat when stuck. I won’t even mention the constant battles with WordPress.

My next bright idea was to rustle up curious lore from the era of my book, THE TOMORROW COUNTRY, set in Victorian London. Only that dragged me back into a time and place I had long ago left behind. I started avoiding it. The blog, which I had committed to publish every week, suffered yawning gaps. I found so many other things to do on blog day.

The only things I wanted to write about were the rural everyday happenings around me, backed by photos from my trusty little camera. So the blog has evolved into snapshots of country life interspersed with periodic rants on things I feel strongly about: banning bottled water, solving male violence, chronic bad temper in movie monsters.

This worried me until I stumbled upon the concept of relationship marketing. Yes, I cried, that’s what I’m doing. People get to know fascinating me and then rush to read my equally fascinating works. Love the idea!

However, by far the majority of my blog readers are from, of all places, China. Next comes the United States, Ukraine, France and Canada, followed by the Russian Federation, Germany, Poland and a whole raft of other countries that include Sweden, Japan, Turkey, Brazil, Romania, Israel, Viet Nam, Thailand and Hong Kong.

I am at a loss to explain my appeal to the Chinese even as I picture some Beijing urbanite riveted by pioneer plowing in rural Ontario. Nor can I explain my most enduringly popular post, entitled Old Friend Crashes to Earth, about an oak that blew down across the lane. It runs neck on neck with another favourite about the Victorian corset and Waking the Fire Goddess, describing the first lighting of my wood stove in the fall. Titles surely help. A post called Beaver Balls, attracts lots of hits from folks who may even stay to read after finding it’s about mud ball towers marking beaver territory. My theory is that so much of the world’s population is now urbanized and run ragged that there is a hidden thirst for simple messages from the natural world.

Does this blog impact book sales or make more savvy marketers shake their heads? I don’t know. I do know it is the only blog that is going to actually get written because it is so much fun to do.

Currently, I am working on a sequel to THE TOMORROW COUNTRY set in Canada.