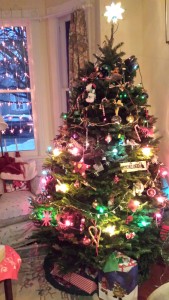 Thank you for making 2016 a fabulous year – with even more to look forward to in the New Year.

After a quick family visit to London, England, we are back home to celebrate Christmas and to perform our sacred rituals – like nom-nom-noming the Festive Special at Swiss Chalet with Ed’s car club!

Santarchy ruled again on Dec 17th.  Costumes were especially creative with an emphasis on naughty. No need for a big budget as you will see in the following pics!

This year went off without a hitch. The weather was mild and perfect for marching down Queen Street. Gathering at the Imperial Pub, we stormed Dundas Square then invaded the Eaton Centre to  give out candy canes and treats to kids.

Group photo on the steps of Old City Hall, then after a long wait for the Zamboni, an impromptu slide across the skating rink at city hall dodging security guards and skaters on blades.

Get turned away at The Rex – check. Wave to Christmas-spirited cab drivers and cops – check.  First stop, The Black Bull – check. The bartenders serve 50+ customers without missing a beat. Amazing!

Some great costumes below.

On to night clubs, Crocodile Rock and The Ball Room, where like the Big Lebowski, you can go bowling. At 1 pm, Ed and I called it a night and walked through the rain to the perennial late night fave, Fran’s on Shuter street. We survived and look forward to Santarchy 2017.

Happy Holidays, folks.  As a special treat, I leave you with one of my big favs, Cats vs Christmas trees!!

Every year on a Saturday mid-December 100+ Santas storm through Toronto’s Eaton’s Centre and head down Queen Street west. Flagrant rebels in search of BEER! This is a world-wide movement from Hanoi to Helsinki to Tokyo to London and beyond. Read about Santacon here.

Ed and I have been part of this rampaging mob for several Christmases now, thanks to our friend Eric. (Read more about Eric and his Grand Guignol clowning in my most popular blog ever, Charlie the Lonely Sentinel. Charlie’s a stuffed dog BTW.)

We’re polite rebels with several rules of decorum, including being nice to kids and obeying police officers and security guards. After all, we’re Canadian! A Santa suit is a must, but one’s imagination may run wild from racy to saucy Mrs. Claus. We’ve even had a Thor Santa! (Sorry, ladies, no photo). And we are led by Old St. Nick in resplendent bishop’s robe and staff.

Typically, we meet up at the Imperial Pub on Dundas St. East then march through the Eaton Centre, giving out candy canes to kids. Then on to Nathan Philip Square for a rampage through the skaters. Group photo at the war memorial on University Avenue then on to The Rex to be refused admission. (Hey, it’s tradition!) The Black Bull though is usually our first and favorite watering hole.

We wend our way down Queen Street, invading the pubs that will let us in. (To be fair, they’ve been pre-warned.) The Academy of Spherical Arts is a fav as well as the late, great Hideout.  This is a way to get in to clubs who would never otherwise let you in because you’re obviously middle class and O-L-D. We’ve even witnessed Fetish Night. (Great material for crime fiction, but who would believe me?)

By 2 am, Ed and I are ready for food (poutine anyone?) and home. Many times the subway has gone sleepy-bye for the night so we’ve relied on the notorious Zoo Bus of our youth. The Yonge St. night bus is a whole quantum level more surreal  and never fails to disappoint.

Interested? The info isn’t up on the website yet but word is that if you come to the Imperial Pub at 6 pm, Sat Dec 17th, you may find something to your advantage…